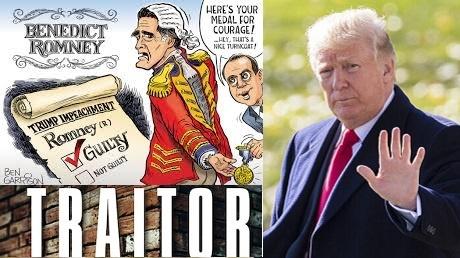 45 Republican Senators State Trump Impeachment Unconstitutional. The 55–45 decision suggests that Trump will not be convicted in an impeachment trial.

Forty-five Republican senators voted against holding an impeachment trial of former President Donald Trump over his remarks at the U.S. Capitol, saying it would be unconstitutional to impeach a former president.

All but five GOP senators sided with an effort proposed by Sen. Rand Paul (R-Ky.), sending a signal that there are not enough votes to convict Trump. Convicting a president during a Senate impeachment trial requires a two-thirds majority.

The Senate ultimately voted 55–45 to table Paul’s point of order, meaning that the impeachment trial will go forward. The House voted to impeach Trump earlier this month on the sole impeachment charge of “incitement of insurrection,” with Democrats claiming he incited violence at the U.S. Capitol earlier this month. Trump called on the protesters not to engage in violent acts and later told them to “go home in peace.”

Ahead of the vote, Paul warned that he wanted to force his colleagues to go on the record.

“If we are going to put every politician in jail, are we going to impeach every politician who has used the words ‘fight’ figuratively in a speech? Shame,” he said. “I want this body on record. Every last person here,” Paul added.

Elaborating, Paul added: “As of noon last Wednesday, Donald Trump holds none of the positions listed in the Constitution. He is a private citizen. The presiding officer is not the chief justice, nor does he claim to be. His presence in the chef justice’s absence demonstrates that this is not a trial of the president, but a private citizen.”

Sen. James Lankford (R-Okla.) issued the following statement after he voted to support Paul’s point of order on the constitutionality of the trial of a former president: “This is not a trial; this is political theater. You cannot remove someone from office who is already out of office. In this trial there is no current President, no Chief Justice, and no possibility someone could be removed from office because they are not in any office. In a moment when our nation needs to unite, this trial will only create even deeper divisions.”

While a number of Republican senators have faulted Trump’s speech to demonstrators as a group breached the U.S. Capitol during the Joint Session of Congress, many have said it’s problematic to impeach a president who doesn’t hold office.

Any Republican who votes to convict Trump is sure to face blowback among the GOP base—as Trump remains an enormously popular figure in the party. Rep. Liz Cheney (R-Wyo.) and about nine other Republican House members who voted to impeach Trump have faced significant criticism and primary threats.

Pushing back against Republicans, Senate Majority Leader Chuck Schumer (D-N.Y.) has stated that the trial is not unconstitutional. At least two Republicans—Romney and Murkowski—agreed with him.

“We need truth and accountability for Donald Trump’s actions. His impeachment trial will move forward in the United States Senate,” Schumer wrote on Twitter.

“It will be unconstitutional, but that probably won’t bother the senators,” Dershowitz told Fox News earlier this month. “The Constitution is very clear. The subject, the object, the purpose of impeachment is to remove a sitting president. And there are two precedents. One is very obvious. When President Nixon resigned in anticipation of being impeached and removed, there was no effort to impeach him after he left office.”