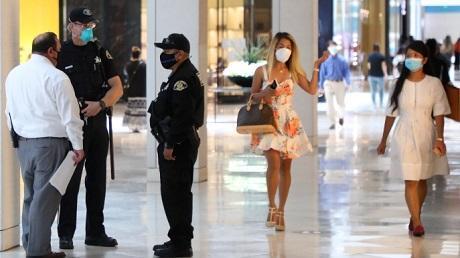 UCLA-Stanford U study: Covid death rates much lower than projected. What’s your risk from coronavirus? Lower than we think, new study suggests. But critics say the study oversimplified answers to one of COVID-19’s most vexing questions

Months into the new coronavirus pandemic, researchers are grappling with an urgent question: How much risk do we have of catching COVID-19 — or dying from it — from our chance encounters?

The debate has flared as authorities find themselves alternately accused of moving too fast or not fast enough in easing restrictions so more business and activity can resume.

Overall, it’s probably less now than many likely believe, given the daily drumbeat of new cases, hospitalizations and deaths, according to new research this month by a pair of medical scientists at Stanford University and UCLA.

“Across the country, current probabilities of infection transmission, hospitalization, and death from COVID19 vary substantially, yet severe outcomes are still rare events,” the study said. “Individuals may be overestimating their risks of hospitalization and death and a moderate number and frequency of community contacts is unlikely to overwhelm hospital capacity in most U.S. settings.”

But like other research challenging assumptions about the disease’s danger, the new findings — yet to be certified through peer review — also raised concerns from other researchers and officials who argue it underplays the virus’s threat.

The risk study by Dr. Rajiv Bhatia, clinical assistant professor of primary care and population health at Stanford, and Dr. Jeffrey Klauser, adjunct professor of epidemiology at UCLA, looked at publicly available case incidence data for the week ending May 30 in the 100 largest U.S. counties as states began to reopen.

“The thing we are looking for is to start a discussion of risk,” Bhatia said. “We’re bombarded with data on death and cases.”

The study found a person in a typical medium to large U.S. county who has a single random contact with another person has, on average, a 1 in 3,836 chance of being infected without social distancing, hand-washing or mask-wearing.

“We were surprised how low the relative risk was,” Klausner said.

The study assumes the same risk for every individual, even though it is known to be higher in certain regions, occupations and residential settings where there have been repeated outbreaks — meat-packing plants, nursing homes, health care jobs, jails and prisons. The study also did not account for a person’s pre-existing health conditions.

And the report did not attempt to compare the risk levels for infection, hospitalization and death from COVID-19 to other infectious diseases or potential dangers such as automobile accidents, which the authors acknowledged is a more difficult exercise. A 2017 report from the National Safety Council calculated the odds of a person dying in a motor vehicle crash at 1-in-114 and dying from a lightning strike at 1-in-161,856. But that’s over a lifetime, not just a single week.

A. Marm Kilpatrick, an infectious disease researcher at UC Santa Cruz, questioned underlying assumptions in the research after reading the paper and said it is “badly flawed.” He was among scientists who also took issue with a Stanford study in April suggesting the virus is more widespread and less lethal than authorities have assumed.

Santa Clara County Executive Jeff Smith, whose administration led the Bay Area in a regional shelter-in-place order and has taken some criticism for its slow pace of reopening, said after reviewing the study its conclusions are “misleading and not helpful.” He noted that the more than 116,000 U.S. fatalities from COVID-19 are on par with the country’s military losses in World War I, which he called “unacceptable.”

Bhatia doesn’t dispute that cumulative COVID-19 deaths have been significant but said the study was an assessment only of average risks based on current infection reports, which after months of lockdown are lower than they were in March. The estimated risks represent a single point in the epidemic in late May and will increase if the infection rates increase.

Epidemiologists say the nature of the new coronavirus that can spread invisibly through people who don’t feel ill makes it hard for people to assess their own risk. Tulane University epidemiologist Susan E. Hassig said that unlike say, HIV, which is spread through sex or drug needles, it’s often a mystery how a person was infected with the new coronavirus. Was it talking to a friend at the park or lunch with a co-worker?

And people don’t have a long history with this new coronavirus from which to develop a sense of risk.

“It’s not like the risk of being struck by lightning,” Hassig said. “We tally that over years, sometimes decades. We’ve been doing the coronavirus for four months, so we’re in a really challenging position where it seems like there’s lots of information but it’s not like it’s data that’s usable to estimate risk.”

Bhatia, deputy health officer for San Francisco from 1998 to 2014, and Klausner have asked the California Department of Public Health to make more COVID-19 case report data available so researchers can refine the risks much more closely for settings and occupations, allowing people to better protect themselves.

“This is the best we could do without more data partitioning the risk in different settings,” Bhatia said. “Yes, the risks are probably lower than most people might perceive. But we could, with better data, make this much more precise.”

The Mercury News, covering news, sports, business, entertainment and more in Silicon Valley and beyond since 1851
Prev Next