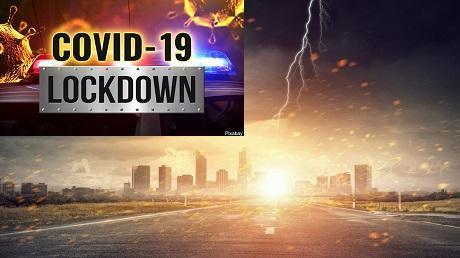 Lockdowns: The Rx is worse than the ailment. The Covid-19 Catastrophe. The lockdowns didn’t just cost millions of people’s livelihoods, they also cost people’s lives.

It has been five months since the American people were told they would be under house arrest for three weeks to “flatten the curve.” Under the guise of protecting us from Covid-19, America’s politicians completed one of the greatest nonviolent power grabs in US history, pushing the lockdowns well beyond the initial three-week prediction, thereby taking control of 330 million lives.

To justify this, they shifted the goal posts from flattening the curve, to halting transmission of the coronavirus entirely. Some even talked about maintaining lockdowns, at least in part, until a vaccine is developed. That could take years.

How did it come to pass that a nation of 330 million was effectively imprisoned, with virtually every sector of the economy shut down either in part or in total? The answer to this question is as clear as it was wrong: In the early days of Covid-19, politicians and experts lined up to tell us that, if we did nothing, up to 2.2 million Americans would die over the balance of 2020.

As of late August, there have been fewer than 170,000 Covid-19 deaths in the United States. If the 2.2 million projection was accurate, then the US lockdown saved in the neighborhood of 2 million lives. But at what cost?

In early March, the Congressional Budget Office predicted that the economic output of the United States economy over the period 2020 through 2025 would total $120 trillion. Just four months later and because of the Covid lockdown, the CBO reduced its projection by almost $10 trillion. That $10 trillion difference is income Americans would have earned had the lockdown not happened, but now won’t.

Economists outside the CBO have estimated this loss at almost $14 trillion. For perspective, the median US household earns $63,000. A $10 trillion loss is equivalent to wiping out the incomes of 30 million US households each year for more than five years.

Our desire to keep people safe, no matter the cost, has already resulted in 10 million Americans being unemployed. By the time things have returned to normal, the total price tag, just in terms of lost incomes and adjusted for inflation, will have exceeded the costs of all the wars the US has ever fought, from the American Revolution to Afghanistan – combined.

And the costs are staggering. As of August, estimates from Chambers of Commerce indicate that around one-third of the 240,000 small businesses in New York City have permanently closed. If that ratio holds for small businesses elsewhere, we could see around 10 million small businesses close permanently across the country. Major retail bankruptcies in the US have been every bit as disconcerting.

All in, the effort to save two million lives from Covid-19 will end up costing us somewhere in the neighborhood of $7 million per life saved. People generally assume the lockdown was worth this massive cost, but there are a couple of things to consider before drawing that conclusion. First, for the same cost, could we have saved even more lives than we did by doing other things? Second, how plausible was the prediction of two million dead in the first place?

The lockdown will cost us more than three hundred times this amount. For a three-hundred fold increase to NCI and NIH budgets, we might well have eradicated heart disease, cancer, lung disease, and Alzheimer’s. Over just a couple of years, that would have saved far more than two million lives.

The lesson here is a simple one: There is no policy that just simply “saves lives.” The best we can do is to make responsible tradeoffs. Did the lockdowns save lives? Some people claim they did – at a cost of $7 million per life saved if the initial estimates were correct – while others fail to establish any connection between lockdowns and lives saved.

Regardless, there are all manner of other tradeoffs here. The lockdowns didn’t just cost millions of people’s livelihoods, they also cost people’s lives. Preliminary evidence points to a rise in suicides. Nationwide, calls to suicide hotlines are up almost 50 percent since before the lockdown. People are less inclined to keep medical appointments, and as a result life-saving diagnoses are not being made, and treatments are not being administered. Drug overdoses are up, and there is evidence that instances of domestic violence are on the rise also.

But what if the lockdown actually didn’t save 2 million lives? There is strong, if not irrefutable, evidence that the initial projections of Covid-19 deaths were wildly overstated.

We can refer to a natural experiment in Sweden for some clarity. Sweden’s government did not lock down the country’s economy, though it recommended that citizens practice social distancing and it banned gatherings of more than 50 people. Swedish epidemiologists took the Imperial College of London (ICL) model – the same model that predicted 2.2 million Covid-19 deaths for the United States – and applied it to Sweden. The model predicted that by July 1 Sweden would have suffered 96,000 deaths if it had done nothing, and 81,600 deaths with the policies that it did employ. In fact, by July 1, Sweden had suffered only 5,500 deaths. The ICL model overestimated Sweden’s Covid-19 deaths by a factor of nearly fifteen.

If the ICL model overestimated US Covid-19 deaths merely by a factor of ten, the number of Americans who would have died had we not locked down the country, but instead practiced social distancing and banned gatherings of more than 50 people, would have been around 220,000.

To date, the CDC reports around 170,000 covid deaths in the United States. In other words, adjusting – even conservatively – for the ICL model’s demonstrated error, it appears that the $14 trillion lockdown perhaps saved about 50,000 US lives. If that’s the case, the cost of saving lives via the lockdown was not $7 million each. The cost was over a quarter of a billion dollars each.

Finally, there is mounting evidence that even if targeted closures had been necessary, a general lockdown wasn’t. Eighty percent of Covid-19 deaths in the US are among those 65 and older. Even if ICL’s flawed model had been correct, and we had been facing the possibility of 2.2 million deaths, only 400,000 of those would have been among working-age Americans. That’s less than two-tenths of one percent of working-age Americans. Social distancing and mandatory masks might have reduced that further. We could have quarantined the elderly, saved nearly all the lives that even the most dire predictions anticipated, and let the economy continue on as usual.

Of course, in March, we knew a lot less than we do now. In the face of 2.2 million likely deaths, many claimed that locking down the economy was the right thing to do. Over the subsequent weeks, as data emerged that the threat was far less deadly and far more focused than it had at first appeared, politicians could have released the lockdown.

They didn’t because politicians invariably feel the need to “do something.” Despite volumes of evidence from disparate fields like economics, social work, ecology, and medicine, it never seems to occur to politicians that sometimes doing less, or even doing nothing, is by far the better approach. Why should it occur to them? When politicians act and their actions do more harm than good, they always say the same thing: “Imagine how bad it would have been had we not acted.”

This won’t stop our politicians from congratulating themselves, of course. Nothing ever does. When the next crisis comes along they will land on the same sorts of heavy-handed solutions they did this time. The only thing that will chasten them is the anger of the American people. Politicians did far more harm to Americans than Covid-19 did, and that’s what the American people need to remember next time our politicians start down the same pointless road.

Get notified of new articles from Antony Davies and AIER.

James R. Harrigan is Managing Director of the Center for Philosophy of Freedom at the University of Arizona, and the F.A. Hayek Distinguished Fellow at the Foundation for Economic Education. He is also co-host of the Words & Numbers podcast. Dr. Harrigan was previously Dean of the American University of Iraq-Sulaimani, and later served as Director of Academic Programs at the Institute for Humane Studies and Strata, where he was also Senior Research Fellow. He has written extensively for the popular press, with articles appearing in the Wall Street Journal, USA Today, U.S. News and World Report, and a host of other outlets. He is also co-author of Cooperation & Coercion. His current work focuses on the intersections between political economy, public policy, and political philosophy.

Founded in 1933, the American Institute for Economic Research (AIER) is one of the oldest and most respected nonpartisan economic research and advocacy organizations in the country. With a global reach and influence, AIER is dedicated to developing and promoting the ideas of pure freedom and private governance by combining advanced economic research with accessible media outreach and educational programming to cultivate a better, broader understanding of the fundamental principles that enable peace and prosperity around the world.
Prev Next

DAILY CALLER
NPR admits it refuses to cover Biden corruption scandals. NPR announced that it is not covering the Hunter Biden laptop story because the media organization…