Expert: Double Masking May Do More Harm Than Good 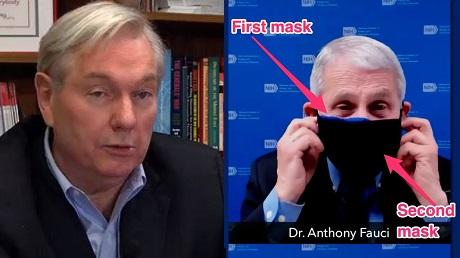 Expert: Double Masking May Do More Harm Than Good.

Infectious disease expert, Michael Osterholm, said that wearing two face masks to protect against the coronavirus may increase the chances of contracting the virus.

Last week, Dr. Anthony Fauci endorsed "double masking" and said the practice would help in protection against the virus.

"If you have a physical covering with one layer, you put another layer on; it just makes common sense that it likely would be more effective, and that's the reason why you see people either double masking or doing a version of an N-95," Fauci said.

But Osterholm explained that double masking could enhance infection.

Osterholm, who served on President Joe Biden's COVID-19 Advisory Board during the presidential transition, explained on NBC's "Meet The Press" that double masking could enhance infection.

"When we talk about double masking, remember what we're really talking about is just trying to prevent the virus from being excreted by me into the air or me inhaling the virus from someone else in the air, and it's both a function of face fit and face filtration," Osterholm said.

Osterholm, who is the director of the Center for Infectious Disease Research and Policy at the University of Minnesota, used swimming goggles to demonstrate the downside to double masking.

"Think about your swim goggles."

"When's the last time anybody leaked at the lenses? They leak at the fit," Osterholm began.

"So, what we're concerned about is that many of these face cloth coverings do have already compromised fit or filtration capacity," he continued.

"If you add on another mask, you may actually make it tougher for the air to move through the two cloth area, and then at that point, it causes more air to actually leak around the sides, which actually enhances your ability to get infected."

Osterholm claimed that double masking might do "more harm" than good.

I'm not saying that some couldn't be used in a better way. But at the same time, there are many that actually, you may do more harm. Let me just say right now one thing that's really, to me, very important is we see up to 25% of people who wear it under their nose. You know, that's like fixing three of the five-screen doors in your submarine. You know, what's going on there? We've got to get people to start using these right. That would help right there tremendously.

There has been no guidance about double masking from the Centers for Disease Control and Prevention.

Current CDC guidance states that cloth face masks should "have two or more layers of washable, breathable fabric" and should "fit snugly against the sides of your face and don't have gaps."

Fauci has since backtracked on double masking being "common sense."

"There's no data that indicates that that is going to make a difference," Fauci said of double masking.

“There’s no data that indicates that that is going to make a difference” pic.twitter.com/ptVivQfuwt