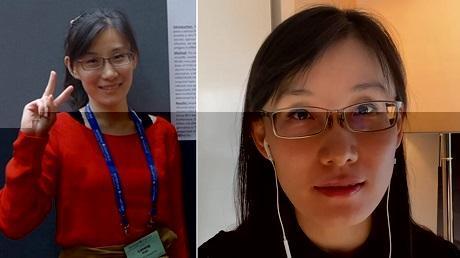 Chinese virologist: "covid virus man-Made in China". Chinese virologist who fled to the US after claiming Beijing covered up Covid-19 vows to publish evidence PROVING the virus is manmade - and claims even non-scientists will be able to verify the data.

A virologist who claimed the Chinese government covered up the coronavirus outbreak says she will produce scientific evidence the virus was man-made.

Respected Chinese virologist Dr Li-Meng Yan, who specialised in virology and immunology at the Hong KongSchool of Public Health, claimed that Beijing knew about the coronavirus well before reports began to emerge.

She has since been forced to flee Hong Kong fearing her life is in danger, and appeared today on Loose Women from a secret location, revealing that the Chinese government had 'removed all her information' from government data bases.

Dr Yan claimed that reports that Covid-19 originated at a wet market in Wuhan are a 'smoke screen', and that she plans to publish a report she claims has evidence the virus is manmade.

Scroll down for video 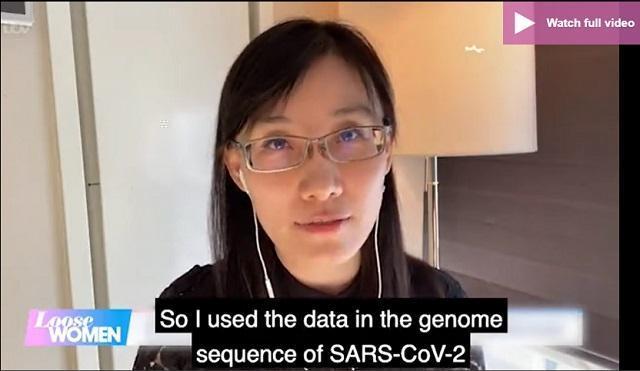 'The first thing is the meat market in Wuhan is a smoke screen and this virus is not from nature,' Dr Yan said.

When asked where the virus comes from, the scientist replied: 'It comes from the lab in Wuhan.'

'The genome sequence is like a human finger print', she said. 'And based on this you can identify these things. I will [use this] evidence to tell people why this has come from the lab in China, why they are the ones who made it.

'Anyone, even if you have no biology knowledge, will be able to read it, and check and identify and verify it yourself.

'It is critical to understand it, we can not overcome it, it will be life-threatening for everyone.'

She claimed that ahead of fleeing her country, her information was wiped from government databases and that her peers were 'told to spread rumours about her'.

'This is some common sense for Chinese people', she said. 'We know under Chinese government [they are at risk]

'They deleted all my information and also they told people to spread rumours about me, that I'm a liar, I don't know anything, I just killed a hamster in the lab. They will try to control my family and friends and then suddenly I don't exist.'

The virologist was based at a prestigious Hong Kong university, one of the world’s leading centres for researching infectious diseases and a key part of the World Health Organisation’s (WHO) global epidemiology network.

Yan says she was one of the first scientists to study the coronavirus that would become known as Covid-19, and claims at the end of December 2019 she was asked by her supervisor at the University to look into an odd cluster of SARS-like cases that had erupted in mainland China.

Through her medical and scientific contacts she claims to have stumbled upon a cover-up of epic proportions, but her evidence about human transmission and claims Beijing deliberately distorting details of the virus' origins were ignored.

As the death toll rose, Dr Yan felt she had a moral and scientific duty to blow the whistle on the cover up, and is now in hiding after travelling to the US, and fears that her life is in danger.

'I was a medical doctor and PHD, said Yan, 'I work with a bunch of the top experts in the world and because I had my two degrees from mainland China, I was the one assigned to do the secret investigation about new pneumonia in Wuhan.

'During my investigation, what I found I reported to my supervisor, there was no response, because everyone was worried.

'So I kept silent, I knew I had to tell people because it's urgent and on the account of a famous Chinese YouTuber in the US it was told to the world [that] China had discovered the Covid situation and [that] human to human transmission already exists.'

Yan claimed she saw 'nobody responding' to her reports of human to human transmission, and that while there is fear surrounding Chinese government, she 'could not keep silent'.

From the beginning, I decided to get this message out in the world and it was very scary in the world because I'm a doctor and I knew if I don't tell the truth to the world I will regret it myself in the future.

She went on: 'I never thought this would happen when I did the secret investigation, I [thought] I would speak to my supervisor and they would do the right thing on behalf of the government.

'But what I saw was nobody responding to that. People are scared of the government but this was something urgent, and Chinese New Year time, [I knew] this was a dangerous virus and all these things meant I could not keep silent, there are human beings and global health [at risk].'

The Chinese national health commission have denied the outbreak started in the lab, saying there is no evidence the new coronavirus was created in a laboratory.

A spokesperson told ITV: 'The fact is there is no delay or cover up  whatsoever from the Chinese government, it reported virus data and relayed information as soon as possible to the international community.

'As soon as cases were identified in Wuhan city China acted immediately to conduct investigations to stop the spread of the disease'.

Feed your daily addiction with the biggest stories from news, politics, showbiz and everything else in between. www.dailymail.com. http://www.dailymail.co.uk
Prev Next