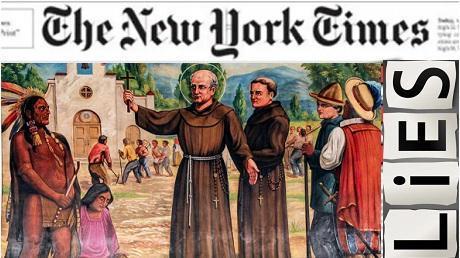 On August 6, I wrote a news release about a column by Elizabeth Bruenig in the New York Times on the work of Father (now Saint) Junípero Serra, the 18th century Spanish priest who championed the human rights of Indians in North America.

I took her to task for the same reason I took the newspaper to task in 2015: She repeated the same scurrilous accusation that Serra “tortured” the Indians (the initial accusation was made in a news story).

In the August 17 edition of the New York Times, Bruenig revisits the Serra controversy. Here is how she opens her piece.

“Last week, a few hours after publishing an essay about American Catholics’ reaction to the Black Lives Matter movement, I received a flood of ill tidings via email. My correspondents’ anger was unrelated to the subject of my article, but was instead inflamed by a mention of Junipero Serra, a canonized Franciscan friar who founded Spanish missions throughout California in the 18th century.”

Bruenig cites the sentence where she accused Serra of torture, but nowhere in her 1754-word article is there even an attempt to disprove what I said. In other words, she provides zero evidence that Serra tortured the Indians. While her piece this time is much more balanced than her initial one, her failure—and the failure of the newspaper—to come to grips with my single complaint is as revealing as it is disturbing.

Father Serra never tortured the Indians. It is a lie. And even now, the New York Times cannot admit it was wrong in 2015 when it first made this charge, and is twice wrong in 2020 for repeating it.

Thanks to all of those who registered their concerns with Bruenig. You are responsible for her second article on Serra.

This time around it would help if you contacted the acting editorial page editor, Kathleen Kingsbury, asking that in the future the paper not reference any accusation that Serra tortured the Indians.

Contact: This email address is being protected from spambots. You need JavaScript enabled to view it.