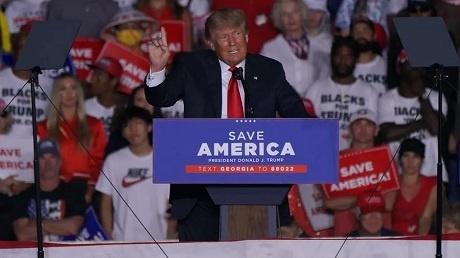 Republicans would be in suicide mode if they part ways with a figure that, despite his unpolished and non-protocol mannerisms, can still energize more than half the country and has ably demonstrated that he knows how to successfully run a nation.

Probably the most honest and intellectually coherent thing Vice-President Kamala Harris has ever stated in public life, has been her pre-election assessment of the impact of Tuesday’s November 2 election. On Friday, October 29, in the historic city of Norfolk (VA), Harris said, “What happens in Virginia will in large part determine what happens in 2022, 2024, and on.” The vice-president was correct. Virginia, like Union General William Tecumseh Sherman’s seminal March to the Sea, was an astounding political victory for Republicans. However, the triumph was not just of any variant of the GOP. This is one of the reasons, Republicans still need Trump.

CNN political commentator Van Jones, known for his brilliant cynicism, called Virginia governor-elect Glenn Youngkin on election night, the “delta variant of Trumpism.” The former Obama administration “green jobs czar”, who resigned over scandals of his previous ties to Marxist groups, was astutely referring to a more sophisticated political class that could have greater effectiveness.