Taliban Advances as US Exits 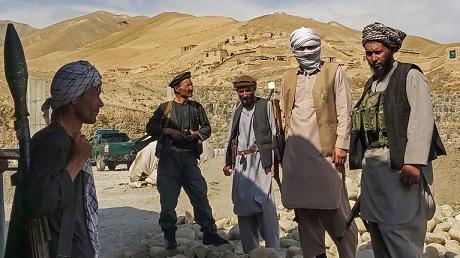 Afghan militia forces stand guard at an outpost as they patrol against the Taliban fighters in the Tange Farkhar area of Taloqan in northern Takhar province on July 6, 2021. (Photo by NASEER SADEQ/AFP via Getty Images)

Taliban Advances as US Exits. Taliban forces have surged as Joe Biden pulled the last of U.S. troops out of Afghanistan. All troops were set to be fully withdrawn by September 11 as the U.S. Central Command announced on Tuesday the drawdown was 90 percent complete.

Experts warned of a foreign policy disaster as the Taliban continues to push Afghan government forces out of multiple territories and gain control of weapons. 1,000 Afghan military members fled the country to Tajikistan, but efforts have been made for them to rejoin the fight against the Taliban.

Over 1,000 Afghan soldiers fled to Tajikistan after clashing with Taliban militants.
The troops retreated over the border to "save their own lives".
The Taliban have made significant gains in recent weeks.
The surge coincides with the end of NATO's 20-year military mission. pic.twitter.com/NVv6Owjnpq

“There are people coming out ready to recruit, ready to join the forces to defend their country throughout,” Afghan National Security adviser Hamdullah Mohib expressed. “That support for the ANDSF is quite heart-warming and we will continue to defend our people as best as we can.”

The last U.S. soldiers are expected to remain protecting the Kabul Airport. The Taliban has warned any remaining foreign troops in the country after the deadline will face consequences.