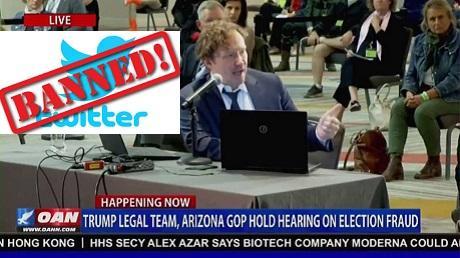 Twitter bans mathematician after AZ testimony. This is the biggest fraud in the history of our constitutional republic is taking place right before our eyes.

Bobby Piton, the mathematician and investment advisor representative of Total Clarity Wealth Management, was blocked by Twitter while giving witness testimony during the Arizona hearing yesterday.

Piton, who testified at the Arizona voter fraud hearing, said after analyzing the data, he believes this is the "biggest fraud in the history of our constitutional republic is taking place right before our eyes.”

Piton’s account was suspended during his testimony, while the hearing was still ongoing.

Piton said he would “rather resign” if he was in charge of certifying Arizona’s election results.

"If I was an executive at a publicly-traded company, I would never sign that, because I risk jail time and having all my money taken from me in lawsuits," Piton said.

"So, to answer your question, I would never, ever, have certified. I’d rather resign than certify those results."

"I believe they’re fraudulent based on the data, and my sister asked me a simple question this morning, she goes ‘how sure are you?'" Piton said.

Expert witness says he believes the numbers in Arizona are fraudulent based on the data: "I'd rather resign than have certified those results" in Arizona today pic.twitter.com/qbDwb76Bg8

"I’m that sure about my analysis, assuming that the data that I got, from the state and everything else, was accurate."

Earlier this week, Twitter banned the account of Pennsylvania state senator Doug Mastriano, who testified at that state’s election hearing.

But Twitter later said Mastriano’s suspension was done in “error.”

"Mr. Dorsey, who the hell elected you?" Cruz blasted as the Twitter boss squirmed.