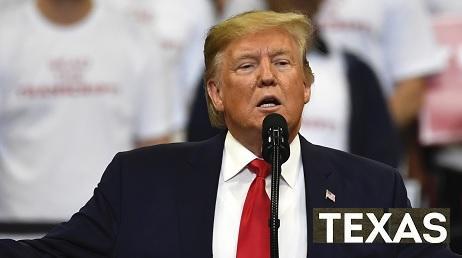 President Trump flipped five Hispanic majority Texas counties during the 2020 election, including a 94% Hispanic county that hadn’t voted for a Republican since 1920.

“One of the biggest surprises of the 2020 election was Zapata County, TX,” Sabato’s Crystal Ball Editor J. Miles Coleman said on Twitter. “Trump became the first R pres. nominee since 1920 to carry this 94% Hispanic county. He got 2,032 votes there, double his 1,029 in 2016. Not a huge county, but Zapata was emblematic of his gains in the RGV.”

One of the biggest surprises of the 2020 election was Zapata County, TX. Trump became the first R pres. nominee since 1920 to carry this 94% Hispanic county. He got 2,032 votes there, double his 1,029 in 2016. Not a huge county, but Zapata was emblematic of his gains in the RGV. pic.twitter.com/7USnJMIP2b

In recent years, Democrats have grown increasingly confident in their ability to achieve electoral success by courting the Hispanic vote. Republicans seemingly agreed that they had a problem on their hands, famously stating in their 2012 “party autopsy” that “if Hispanic Americans perceive that a GOP nominee or candidate does not want them in the United States (ie. self-deportation), they will not pay attention to our next sentence. It does not matter what we say about education, jobs, or the economy; if Hispanics think we do not want them to be here, they will close their ears to our policies.”

Four years later, many believed Trump’s strong anti-immigration rhetoric would result in a flood of Hispanic voters showing up at the polls to oppose his candidacy. Instead, Trump likely fared better among Hispanic voters in 2016 than former Republican presidential candidate and current U.S. Senator Mitt Romney did in 2012.

Since Trump entered office, he has largely made good on his promise to cut down on illegal immigration. The president’s executive orders and regulatory changes have reshaped America’s immigration policy. The Migration Policy Institute, a nonpartisan research organization, estimates Trump has taken more than 400 actions to curb immigration.

As a result, Democrats have hit Trump with charges of racism and white supremacy. Yet, polls have shown that their rhetoric hasn't affected Trump’s gains among Hispanic voters. Instead, Trump entered last week’s election poised to make significant gains among Hispanics.

Trump’s gains in these 17 counties ranged from a low of 13.2 points in Dimmit County to the 55.8 point swing in Starr County. On average, Trump gained 26.8 points in the 17 counties, which have an average Hispanic population of 88.8%.

Democrats had expressed hope that 2020 was the year they would break through and take the longtime Republican stronghold of Texas. Polls showed a tight race in the days leading up to the election, with some even showing Biden enjoying a slim lead. Instead, Trump won the state by almost 6 points, largely thanks to narrowing the Democratic grip on Hispanic voters.

A similar story played out in the battleground state of Florida, where early exit poll numbers suggest Trump captured nearly half of the Hispanic vote in the state.

In the Democratic stronghold of Miami-Dade County, which has a 69.4% Hispanic population, Biden’s margin of victory was 7.3 points, a huge departure from Clinton's victory there by over 29 points, a nearly 22 point swing toward Trump.

Unlike the Hispanic populations in Texas, Florida’s Latino communities skew more toward Cuban and Venezuelan immigrants. Having fled from socialist countries themselves, some of these voters may have shifted away from a party that is increasingly defined by its more far-Left members.

“If something smells like socialism or is slightly similar we don't like it, we don’t want it for our children’s future,” said German Pinelli, a Cuban salsa music artist made famous for his band’s song in support of Trump.

Entering Election Day, FiveThirtyEight statistician Nate Silver gave Trump just over a 30% chance of winning Florida. Most polls there showed Biden with close to a comfortable lead, yet the president carried the state by more than he did in 2016.

“Democrats are socialists, radicals or left wing and even if they aren’t, they would be subject to the pressures from Bernie Sanders and Alexandria Ocasio-Cortez," Jorge Duany, the head of the Cuban Research Institute at Florida International University, said.