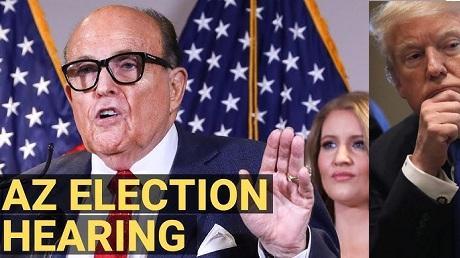 Officials confirmed the state used software by Dominion Voting Systems, which attorney Rudy Giuliani called a troubled foreign company with the “most porous” system of all the automatic voting machine companies.

Mayor @RudyGiuliani to Arizona state legislatures: “Your political career is worth losing if you can save the right to vote in America.” pic.twitter.com/IPumw6Z3tB

One poll watcher testified she was certified to witness poll workers study questionable ballots, but was denied access to watch. The purpose of the public hearing was to collect evidence in the 2020 election, which would justify holding a special session for state lawmakers to investigate.

Meanwhile, retired Col. Phil Waldron also confirmed voting machines in Arizona used Smartmatic derivative software. He explained it’s a common software being used in the U.S. His testimony indirectly confirms the claims of potential Venezuelan and Iranian meddling in the election, which went through Scytl servers in Europe.

Dr. Shiva Ayyadurai presents his data at the #ArizonaHearing, showing the only way for Biden to have statistically caught up with @realDonaldTrump was if Democrat votes came in at 130% for Biden and -30% for Trump pic.twitter.com/P2q80JWs78

Waldron’s testimony confirmed foreign meddling was helping Joe Biden and switching votes away from President Trump. Attorney Sidney Powell said the Scytl server has since been seized and secure by who she called “the good guys.”