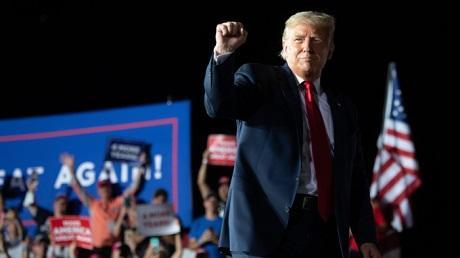 President Donald Trump appeared fit and in good spirits on Oct. 12 in Florida at the first rally after recovering from COVID-19.

The president spent just over an hour on a makeshift outdoor stage on a tarmac in Sanford, Florida. He delivered his characteristic rapid-fire speech, lauding his administration’s accomplishments, criticizing opponents, and urging supporters in Florida to vote early, including by mail.

Trump arrived in Florida hours after his physician, Sean Conley, confirmed that the president had tested negative for two consecutive days for the Chinese Communist Party (CCP) virus, commonly known as the coronavirus. The president contracted the virus earlier this month but recovered rapidly during a four-day hospital stay. The president is “not infectious to others,” Conley said in a memo.

“One thing with me, the nice part, I went through it. Now, they say I’m immune,” Trump said.

“I feel so powerful. I’ll walk into that,” he added, pointing at the crowd. “I’ll kiss everyone in that audience. I’ll kiss the guys and the beautiful women, and then everybody—just give you a big fat kiss.”

The president has repeatedly emphasized his immunity to the virus in an apparent contrast to Democratic presidential nominee Joe Biden who by all accounts has not contracted the disease.

Vice President Mike Pence toured the state the same day and spoke to a crowd of more than a hundred supporters in Columbus.

The president appeared to break a sweat toward the end of the speech with weather in Sanford in the mid 80s. But his tempo and overall appearance appeared unaffected despite his bout with COVID-19, the early stage of which included fever, fatigue, and two incidents when the president’s blood-oxygen levels dropped.

Trump received a unique mix of medicines to deal with the virus, including an experimental antibody cocktail which is still being tested. The president suggested that the administration is looking into making the treatment he received widely available to the public.

“We’ve made tremendous progress and I said to my people, we are going to take whatever the hell they gave me and we’re going to distribute it around to hospitals and everyone is going to have the same damn thing,” Trump said.

The president ticked through a familiar list of themes and revealed, for the first time, that his administration will deal with the Obama-era officials who spied on his 2016 presidential campaign “after the election.”

“We’ll take care it after the election … but that gives you another reason to go out and vote. We gotta get in because if we don’t, they’ll just sweep it under the rug,” the president added.

The crowd reacted to parts of Trump’s speech with familiar chants, including “USA” and “Four more years,” as well as the relatively new “We love you.”

The administration has purchased millions of doses of each in order to rapidly distribute those which clear trials.

Trump has back to back rallies scheduled on Tuesday, Wednesday, and Thursday in Pennsylvania, Iowa, and North Carolina.