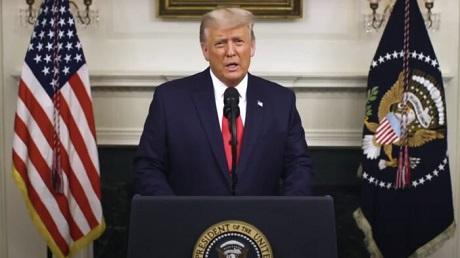 President Donald Trump asserted on Dec. 2 that he won the 2020 election and said America’s election system is under siege.

Trump, speaking from the White House in a video that he released on social media, said his job as president is to defend the laws and Constitution of the United States and that he’s determined to protect the election system, which he said is “under coordinated assault and siege.”

Trump accused Democrats of implementing a mass mail-in balloting scheme in order to steal the election and outlined aspects of the Nov. 3 election that he sees as suspicious or fraudulent.

Using the pandemic as a pretext, he said, Democratic officials and judges drastically changed election procedures in the months and weeks leading up to the election, in apparent violation of the Constitution.

Judges in multiple states have ruled the changes likely violated the Constitution, including in Minnesota and Pennsylvania. Secretaries of state in those two states were ordered to separate late-arriving ballots while the cases are decided.

Trump said his campaign has found that many voters in Pennsylvania received two ballots in the mail, while others received ballots for which they never applied. 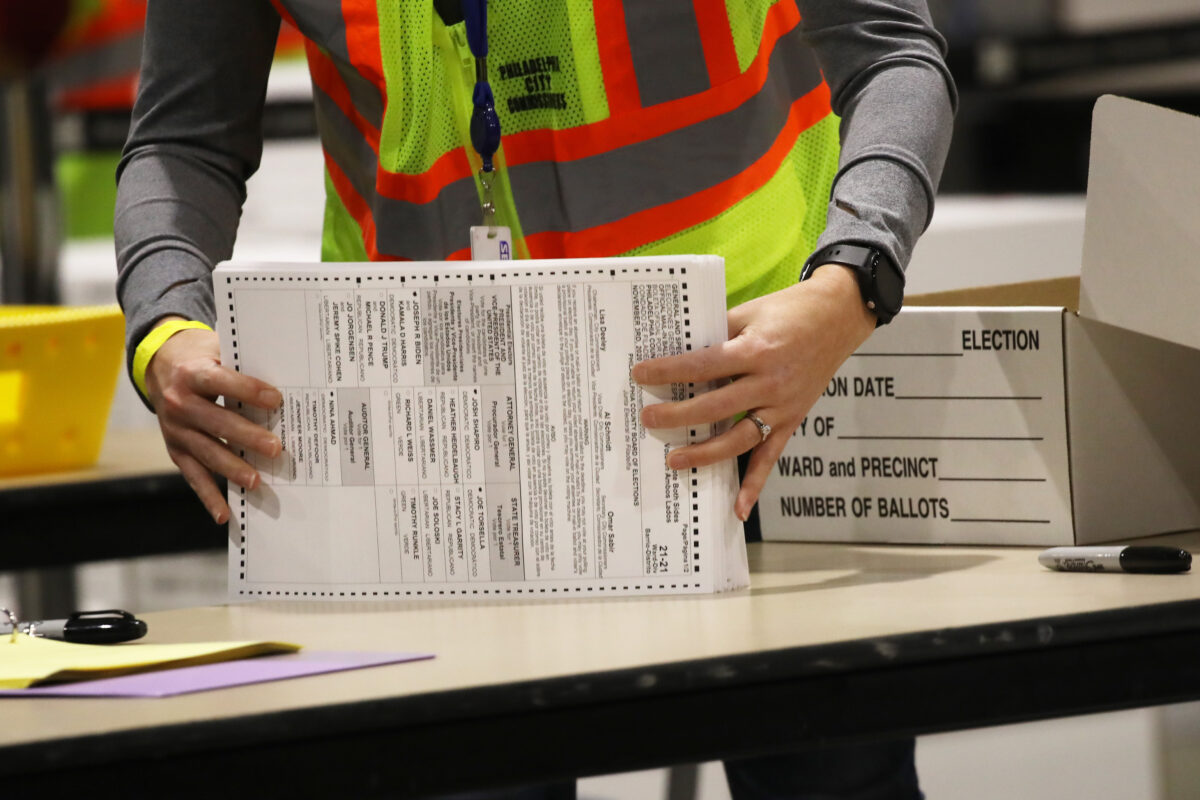 Officials in a number of states sent either mail-in ballots to every single voter or absentee ballot request forms to all voters, in what Trump called a “colossal expansion of mail-in voting.”

Voter rolls across the nation include people who are dead, have moved away, or are noncitizens. Several major lawsuits from nonprofits have led to the purging the rolls of hundreds of thousands of such people.

Dozens of counties have “more registered voters on the rolls than they have voting-age citizens, including 67 counties in Michigan,” Trump said.

Trump pointed to spikes in battleground states for Biden early on Nov. 4, including Michigan and Wisconsin, which data experts have said were anomalous and warrant a review. Trump had strong leads in the states before the spikes.

He also mentioned Dominion Voting Systems, which Texas officials rejected because of concerns about security and potential fraud. In Antrim County, Michigan, for instance, a county initially reported a win for Biden but later acknowledged that 6,000 votes were wrongly placed in the Biden column, flipping the county to Trump.

Dominion has challenged allegations involving its machines. In a statement on its website that it regularly updates, Dominion called assertions about vote switching and software issues “false.”

The president also noted that thousands of uncounted ballots were discovered in Georgia during a hand audit, most of which were for him, and that Republican poll observers were blocked from entering buildings or placed so far away they couldn’t properly observe ballot counting. Affidavits from election workers and observers attesting to fraud are part of court cases filed by Trump’s campaign or others in states like Michigan and Wisconsin. 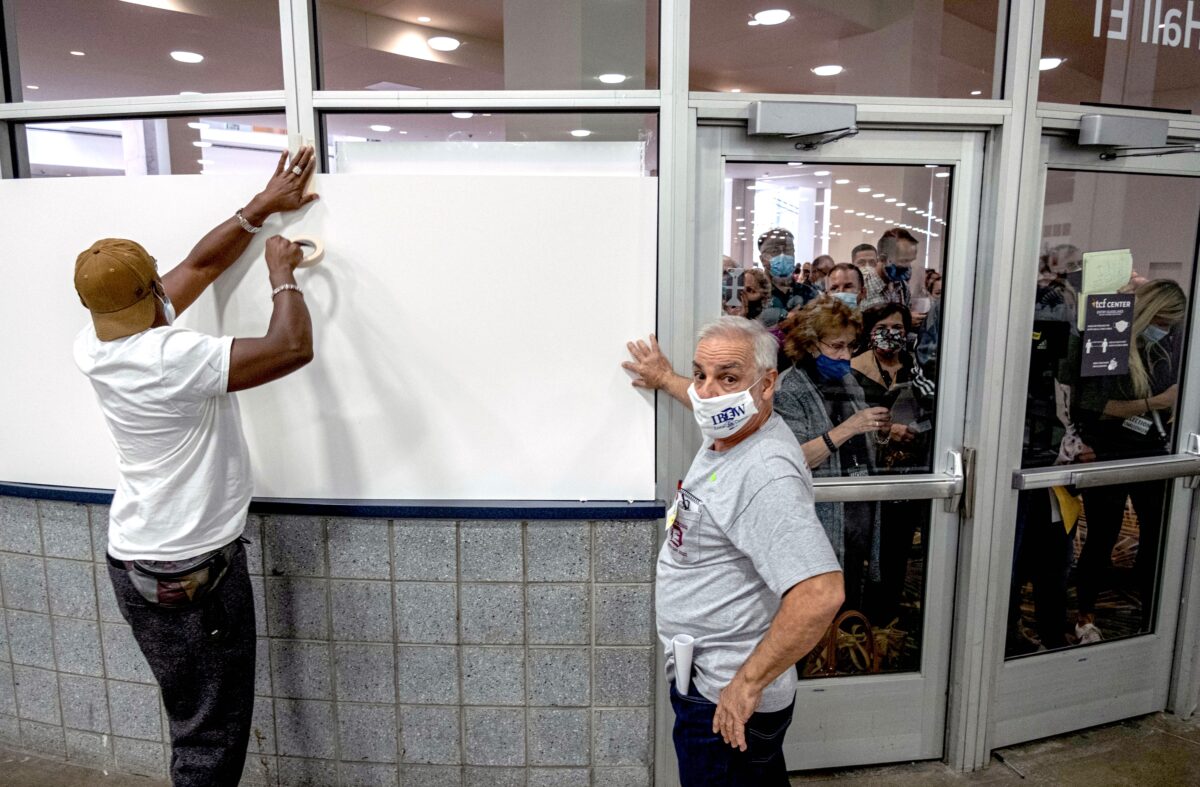 Poll workers board up windows of the ballot counting area at the TCF Center in Detroit on Nov. 4, 2020. (Seth Herald/AFP via Getty Images)

“All of this is evidence,” Trump said, adding that “shocking irregularities, abuses, and fraud” have been uncovered in recent weeks.

“If that’s the case, the results of the individual swing states must be overturned and overturned immediately,” he said.

Trump said that he was warned by many before the election not to declare premature victory while Biden barely campaigned, spending months in his basement after the COVID-19 pandemic was declared and consecutive strings of days off the campaign trail in the weeks leading up to Nov. 3.

“In fact, they were acting like they already knew what the outcome was going to be. They had it covered. And perhaps they did, very sadly for our country,” Trump said.

“Within days after the election, we witnessed an orchestrated effort to anoint a winner, even while many key states were still being counted. The constitutional process must be allowed to continue. We are going to defend the honesty of the vote by ensuring that every legal ballot is counted and that no illegal ballot is counted.”

Biden’s campaign didn’t immediately respond to a request for comment on Trump’s video.

Election officials in swing states say the election ran smoothly. They’ve said instances of fraud either didn’t happen or weren’t enough to change the outcome of the election.

“The election was fair and secure, and the results accurately reflect the will of the voters,” Michigan Secretary of State Jocelyn Benson, a Democrat, said last month.