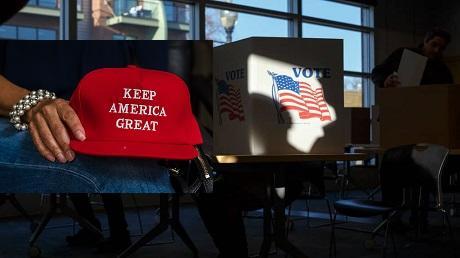 The registration data shows Republicans gaining more voters than Democrats, and Democrats lagging their 2016 registration numbers in two cases. The data, which is from March through September, is as follows:

The national polls have Trump lagging Biden nationally, but if the polls are wrong by the same margin of error as they were in 2016, Trump has an easily path to an electoral victory. According to an analysis from the New York Times, if the average poll is 100% accurate, they project Biden winning 353 electoral votes to Trump’s 185. For reference, the Times predicted that Hillary would win 347 electoral votes to Trump’s 191 by this exact same logic in 2016.

But what if we take the average poll at face value, and then subtract the difference of how much they were off by in 2016? In that case, Trump could be reasonably expected to win 278 electoral votes to Biden’s 260. (And given the Times’ track record with these kind of projections, Trump would probably lead by more).

Because of how Trump is performing this far in key battleground states, Biden could need a 3-4 point in the popular vote just to have a greater than 50% chance of winning in the electoral college. Even if Biden leads the popular vote by a point there’s still a 94% chance Trump would become President, and the figure is 78% in Trump’s favor if Biden leads 1-2 points. This is because the distribution of where support is located matters. Biden picking up additional support in a state like California may boost his poll numbers overall , but it will make no impact on his odds of winning the national election because there’s never any doubt the Democrat is going to win California’s electoral votes regardless.

Chance of a Biden Electoral college win if he wins the popular vote by X points:

As for if the pollsters have gotten any better since the last election cycle, that’s doubtful.