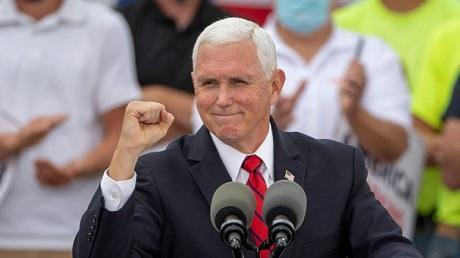 Vice President Mike Pence has announced he is supporting the move by a group of Republican senators to challenge the Electoral College certification of the presidential election results.

Over the weekend, a group of senators, led by Sen. Ted Cruz (R-TX), revealed their intentions to block the official certification of the results of the 2020 election.

Shortly after, the vice president issued a statement vowing to throw his full support behind the effort.

Pence Chief of Staff Marc Short declared in the statement that “Vice President Pence shares the concerns of millions of Americans about voter fraud and irregularities in the last election.”

“The Vice President welcomes the efforts of members of the House and Senate to use the authority they have under the law to raise objections and bring forward evidence before the Congress and the American people on January 6th,” Short added, according to The Hill.

On Wednesday, Pence will preside over the joint session of Congress, which should make things awkward for both Democrats and the Republican Party establishment.

As Neon Nettle reported, the statement from 11 of the 12 GOP senators and senators-elect planning to challenge the results said that the 2020 election “featured unprecedented allegations of voter fraud, violations and lax enforcement of election law, and other voting irregularities.”

Joining Cruz in the effort are Sens. Marsha Blackburn of Tennessee, Mike Braun of Indiana, Steve Daines of Montana, Ron Johnson of Wisconsin, John Kennedy of Louisiana, and James Lankford of Oklahoma.

The four senators-elect who signed on, who will be sworn in before the certification, are Bill Haggerty of Tennessee, Cynthia Lummis of Wyoming, Roger Marshall of Kansas, and Tommy Tuberville of Alabama, according to The Hill.

Sen. Josh Hawley of Missouri had already pledged to challenge earlier in the week, according to Western Journal.

“The election of 2020, like the election of 2016, was hard fought and, in many swing states, narrowly decided. The 2020 election, however, featured unprecedented allegations of voter fraud, violations and lax enforcement of election law, and other voting irregularities,” the senators said in a joint statement published on Cruz’s website.

"Voter fraud has posed a persistent challenge in our elections, although its breadth and scope are disputed.

"By any measure, the allegations of fraud and irregularities in the 2020 election exceed any in our lifetimes.”

The group demanded that “Congress should immediately appoint an Electoral Commission, with full investigatory and fact-finding authority, to conduct an emergency 10-day audit of the election returns in the disputed states” and declared that they “intend to vote on January 6 to reject the electors from disputed states as not ‘regularly given’ and ‘lawfully certified’ (the statutory requisite), unless and until that emergency 10-day audit is completed.”

A 10-day audit would be completed before the constitutionally mandated date of Jan. 20 for the next presidential inauguration.

The list of disputed states wasn’t given in the statement.

However, they proposed the audit would be conducted by a commission that would resemble the one assembled by Congress in the wake of the disputed 1876 election: Five House members, five senators, and five Supreme Court justices.

“We are not naïve,” the statement reads.

"We fully expect most if not all Democrats, and perhaps more than a few Republicans, to vote otherwise.

“But support of election integrity should not be a partisan issue.

"A fair and credible audit — conducted expeditiously and completed well before January 20 — would dramatically improve Americans’ faith in our electoral process and would significantly enhance the legitimacy of whoever becomes our next President.

"We owe that to the People,” the statement concludes.

In Hawley’s statement, issued Wednesday, the senator said that he “cannot vote to certify the electoral college results on January 6 without raising the fact that some states, particularly Pennsylvania, failed to follow their own state election laws.

"And I cannot vote to certify without pointing out the unprecedented effort of mega-corporations, including Facebook and Twitter, to interfere in this election, in support of Joe Biden.

"At the very least, Congress should investigate allegations of voter fraud and adopt measures to secure the integrity of our elections.

"But Congress has so far failed to act.”

He also pointed out that Democrats have objected to the electoral vote in both 2004 and 2016.

The group of objecting senators has been called the “dirty dozen” by many — including former Missouri Sen. Claire McCaskill, whom Hawley defeated in 2018.

There are actually 12 Senators “pointing a loaded gun” at the heart of democracy. They should always be known as the #dirtydozen They all know better. They all know there is no evidence. They all know that every case was thrown out of court, even by Trump appointees.

A challenge to the Electoral College is a complicated thing, however.

Under this process, if one senator and one House member object to a state’s electors, both houses will separately debate the matter and vote on it.

If both choose to reject the electors in question, the 12th Amendment then comes into effect.

Since there’s technically no winner in the Electoral College, under the 12th Amendment, each state’s House delegation votes on the president.

While House members have frequently objected to the electoral count if their party lost — Hawley forgot 2000, where House Democrats vigorously opposed the certification of George W. Bush’s win over Al Gore — it’s unusual for a senator to join in the objection, as is necessary under the Electoral Count Act.

It’s only happened twice, according to a 2016 white paper by the Congressional Research Service, and only once could it have substantively changed the results of an election.

In 1969, Rep. James O’Hara of Michigan and Sen. Edmund Muskie of Maine, both Democrats, challenged an elector from North Carolina who was supposed to cast his vote for Republican Richard Nixon but instead decided to vote for segregationist Alabama governor and third-party candidate George Wallace.

This wouldn’t have changed the results of the election in any meaningful way, since Nixon won the Electoral College vote 301-191 over the Democrat nominee, Vice President Hubert Humphrey.

Wallace got 46 electoral votes, all from the Deep South. (Ironically, had the objection succeeded — it didn’t — it would have been helping Muskie’s competition; the Maine senator was Humphrey’s running mate.)

A 2005 challenge, however, could have changed the election.

Amid claims of voting fraud in Ohio, the key state in deciding the 2004 election, Rep. Stephanie Tubbs Jones of Ohio and Sen. Barbara Boxer of California, both Democrats, lodged a challenge to the state’s electors.

The claims were thin and based on conspiracy theories involving voting machines made by a company called Diebold.

In 2016, despite numerous House Democrats lodging objections to Trump’s win, none could find a senator to co-sign, according to Reuters.

The Democrats control the House, which means it’s unlikely a majority of it will vote against electors under dispute.

Meanwhile, Senate Majority Leader Mitch McConnell has done everything in his power to preclude a senator signing on to a challenge by House Republicans, which means he’ll definitely be voting with Democrats on this matter — and he won’t be the only Republican doing so.

In a conference call with Republicans last week, Axios reported McConnell told his caucus that “I’m finishing 36 years in the Senate and I’ve cast a lot of big votes … [and] this is will be the most consequential I have ever cast.”

“McConnell had previously urged senators not to force this vote, which he believed would put Republicans up for re-election in 2022 in a horrible position — forcing them to choose between defying the most popular politician in the party, Donald Trump, and undermining democracy,” the outlet reported.

Imagine if Trump had won under these rules, however.

Then imagine how many Democratic senators would be lining up to do the same thing these 12 Republicans are.

There are too many legal and numerical irregularities to let it pass by, particularly when there are those who think this is how we should conduct our elections going forward.

If Mitch McConnell won’t step up and provide support when necessary, at least Mike Pence is willing to do the right thing.

[RELATED] Sidney Powell: 'I Don't See How Any Good Christian Can Certify a Fraudulent Election'