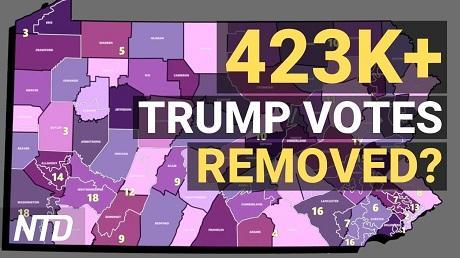 Over 432,000 Votes Removed From Trump. Pennsylvania election data shows that over 432,000 votes were removed from President Donald Trump during the November election, data scientists say.

According to an analysis by the Data Integrity Group, obtained exclusively by The Epoch Times, votes for Trump—from both Election Day and mail-in ballots—were removed from the totals in at least 15 counties.

Time-series election data shows Trump’s votes decrementing in various counties at numerous time points instead of increasing as would be expected under normal circumstances.

“There were vote movements across all candidates. However, we did not see the same type of negative decrements to any of the [other] candidates that we saw with President Trump’s tallies, and they happened repeatedly with no explanation,” Lynda McLaughlin, a member of the group, told The Epoch Times.

The Pennsylvania Secretary of State’s office didn’t respond to a request for comment from The Epoch Times.

The Data Integrity Group is a group of scientists, engineers, and machine learning experts who have been working together to check whether or not there was manipulation of data in the 2020 general election.

Mealey is a nine-year veteran of the U.S. Navy, where he worked as an electronic warfare technician, cryptologic technician, and Arabic linguist. He worked at the NSA as a mission manager for Levant/North Africa and later worked as a CIA contractor at the National Counter-Terrorism Center.

Lobue has 12 years of experience in data science and machine learning across financial services, telecommunications, and research consulting industries. He currently specializes in artificial intelligence applications.

Data scientists from the group have analyzed the election data for several states including Arizona and Georgia.

In their analysis of Georgia’s election data, the group said it found that more than 30,000 votes had been removed from Trump’s tally, and another 12,173 votes were switched to Biden.

However, the group urged the state to authorize forensic audits to uphold election integrity and said it’s irresponsible to certify the results before the alleged errors and anomalies are explained.

“The bottom line is the errors were made. Data confirms these errors and it shouldn’t matter if they were machine or human, they’re still errors and deserve a second review and thorough analysis with forensic audits to find the answers,” the group said.

During the vote tabulation process, the results, which are commonly known as tabulated results, are sent to the secretary of state’s office. The data is then also shared with the media via Edison Research.

Errors could be made in several steps in the election result reporting process.

Though it’s unclear what caused the errors that were flagged by the Data Integrity Group, Edison Research did admit a reporting error that happened separately.

In a widely-circulated video clip of CNN’s live election night broadcast, 19,958 votes were seen being switched from Trump to Biden in 30 seconds.

Rob Farman, executive vice president at Edison, admitted that the “switching” stemmed from a brief reporting error from Edison Research.

He told The Associated Press that a state feed from Armstrong, Pennsylvania, first showed the correct values of 24,233 votes for Trump and 4,275 for Biden, but a team member had mistakenly entered them backward—4,275 for Trump and 24,233 for Biden. Farman said the company’s quality control team discovered the error and corrected it that night. 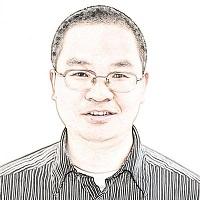 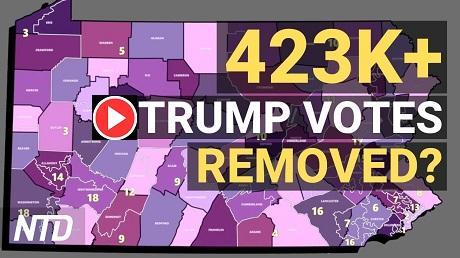