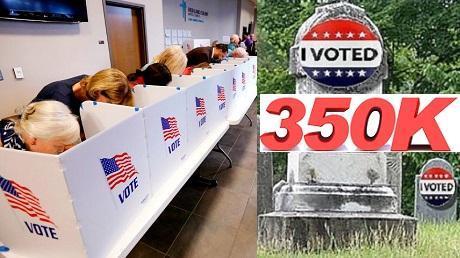 Organization President and General Counsel J. Christian Adams told The Kyle Olson Show people are getting registered to vote multiple times, and secretaries of state such as Michigan’s Jocelyn Benson are not doing anything about it.

According to the report, titled, “Critical Condition: American Voter Rolls Filled with Errors, Dead Voters, and Duplicate Registrations,” 349,773 “deceased registrants” have been found on rolls in 41 states. Fifty-one percent of those are in New York, California, and Texas, as well as the battleground states of Michigan and Florida.

Some of those voters who are registered multiple times “are casting multiple ballots,” Adams said.

“Michigan voter rolls are a mess and that’s exactly why Michigan should not be doing mail balloting until they clean up their act,” he told The Kyle Olson Show.

Adams contended cleaning up the “mess” would be as simple as sorting the list by address and “see who’s all crammed into one house.”

In August, as many as 20,000 unverified ballots were fed through machines in Detroit during absentee vote counting. Bob Cushman, an eyewitness to it all, recounted his observations on a recent episode of The Kyle Olson Show:

Adams argued that sort of incident will not be stopped “because that’s the kind of thing Jocelyn Benson likes to see.”

He said that was how “elections got cooked” around the country. Workers would shove absentee ballots “into the counter before they could be verified.”

The danger comes, he said, in determining a winner and potentially reversing that declaration days later.

Adams said that “instills skepticism” among citizens and “is destabilizing.”