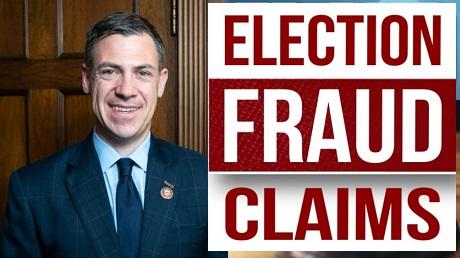 “I’ve joined 38 of my colleagues in writing a letter to AG Bill Barr requesting he investigate claims of voter fraud and make sure only all legal votes are counted in this election,” Banks said on Twitter, adding a letter the group sent out to Barr asking for the investigation.

“The American people need to have confidence that the outcome of this election is legitimate!!” he continued.

I’ve joined 38 of my colleagues in writing a letter to AG Bill Barr requesting he investigate claims of voter fraud and make sure only all legal votes are counted in this election.

The American people need to have confidence that the outcome of this election is legitimate!! pic.twitter.com/lXHYCU7FFC

The group of representatives in the Nov. 6 letter asked Barr with current “reports of irregularities particularly in the vote-counting process, it is time for you to use the resources of the Department to ensure that the process is conducted in a manner that is fully consistent with state and federal law. And it is also important that the process be completely transparent so that the American people will have full confidence in the results.”

The group wrote the launch of an investigation is a responsibility to ensure that “the right to vote is sacred.”

“This not only means access to the ballot box, but it also means ensuring that no one’s vote is devalued by any means of voter fraud,” the letter reads, adding that judicial orders have to be followed and observers have to be able to watch ballot counting.

“With that in mind, we request an immediate response to the following questions. What are you doing to ensure the integrity of the voting and counting process right now? Will you commit to using all the resources at your disposal to ensure that only legal votes are being counted and being counted in a fully transparent manner immediately?” it continues.

President Donald Trump has repeatedly claimed Democrats are committing massive fraud and are “stealing” the election.

The Trump campaign beginning Monday will start prosecuting its case in court to make sure election laws are fully upheld and the rightful winner seated, according to Trump.

“We all know why Joe Biden is rushing to falsely pose as the winner, and why his media allies are trying so hard to help him: they don’t want the truth to be exposed. The simple fact is this election is far from over. Joe Biden has not been certified as the winner of any states, let alone any of the highly contested states headed for mandatory recounts, or states where our campaign has valid and legitimate legal challenges that could determine the ultimate victor,” he said.

Zachary Stieber contributed to this report.