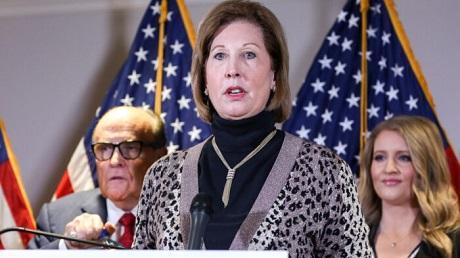 President Donald Trump lawyer Rudy Giuliani offered an explanation on why Trump’s legal team issued a statement saying lawyer Sidney Powell is not with the campaign.

“I think it’s because we’re pursuing two different theories,” Giuliani said when he was asked about the situation by Fox News host Lou Dobbs. The Trump legal team, he said, is focused on “misconduct of the election” by state officials in places like Pennsylvania, Michigan, Georgia, and elsewhere.

Giuliani argued that Trump’s constitutional rights were deprived in some of these states, and he predicted that some of their lawsuits will make it to the Supreme Court. The former New York mayor didn’t elaborate on what Powell was working on.

Powell had spoken on an alleged transnational scheme that flipped votes via election software with the aid of “communist money” from Venezuela, Cuba, and possibly China.

“There is no way such a massive fraud could have taken place,” spokesman Michael Steel said over the weekend. “And there are no connections between our company and Venezuela, Germany, Barcelona,” or elsewhere. Steel said that the electronic vote can be audited via a paper trail.

But Powell said in a news conference that “American patriots are fed up with the corruption from the local level to the highest level of our government.”

Powell, a former federal prosecutor, called for criminal investigations into her allegations.

In interviews with Newsmax and others, Powell said the team would file a lawsuit of “biblical” proportions. She added, “It’s a massive project to pull this fraud claim together with the evidence that I want to put in.”

Also last week, Fox News host Tucker Carlson questioned her claims and demanded that she provide evidence on his popular show. Powell, in response to a question in a Fox Business interview, said that she “sent an affidavit to Tucker that I had not even attached to a pleading yet to help him understand the situation, and I offered him another witness who could explain the math and the statistical evidence far better than I can.”

Following Giuliani’s Sunday night announcement that Powell isn’t working for the Trump team, Powell said that she understands why Trump’s team made the statement.

“I will continue to represent #WeThePeople who had their votes for Trump and other Republicans stolen by massive fraud through Dominion and Smartmatic, and we will be filing suit soon. The chips will fall where they may, and we will defend the foundations of this great Republic. #KrakenOnSteroids,” she said.

Lt. Gen. Michael Flynn, a former White House official who was represented by Powell, wrote that she will prove that election fraud had occurred.

“She understands the WH press release & agrees with it,” Flynn said. “She is staying the course to prove the massive deliberate election fraud that robbed #WeThePeople of our votes for President Trump & other Republican candidates.”