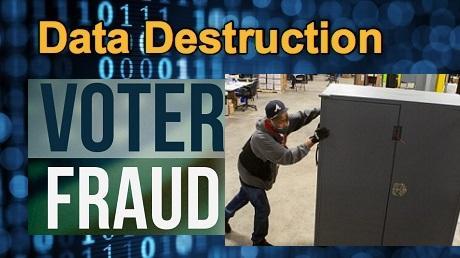 Update: The judge has reversed the order. Read the story here.

A judge presiding over an election lawsuit in Georgia on Nov. 29 ordered the state to cease and desist wiping or resetting its election machines.

“Defendants are ordered to maintain the status quo & are temporarily enjoined from wiping or resetting any voting machines in the State of Georgia until further order of the Court,” Judge Timothy Batten wrote in an emergency order issued Nov. 29.

Lin Wood, an attorney associated with the Trump campaign, was the first to share the news.

The plaintiffs in the lawsuit on Nov. 29 filed an emergency motion that included a message from an election official stating that the ballot-counting machines would be reset to zero on Nov. 30, before a recount.

“The process will begin with an L & A – resetting the machine to ‘zero’ to begin the recount,” the text of the message stated before discussing specifics of the recount process.

The message was part of an affidavit by a GOP poll worker filed alongside the emergency order. Upon seeing the message, the poll worker says he or she wrote to the election manager.

“Because the plan on Monday is to wipe the voting machines clean, and start from 0 so that we can recount using those machines, I’m concerned by what I am reading online,” the poll worker wrote, according to the affidavit. “I am seeing lots of notices from lawyers about possibly impounding the machines. Lawyers are now saying that the machines should be confiscated immediately before this happens to protect forensic data. They are saying those machines need to be impounded ASAP. Yikes. Maybe I’m being overly paranoid but let’s be sure this is what we’re supposed to be doing.”

The supervisor responded, “It’s what we are supposed to do. It will take a court order to stop this process—so I guess we need to keep watching the news. If we get a court order to stop, we will see it in our SOS information. The issue is, the Atlanta area has already started,” the elections manager wrote.

When the poll worker asked if the reset will wipe the forensic info from the machines, the manager said that “Atlanta already did it.”

Petr Svab contributed to this report.