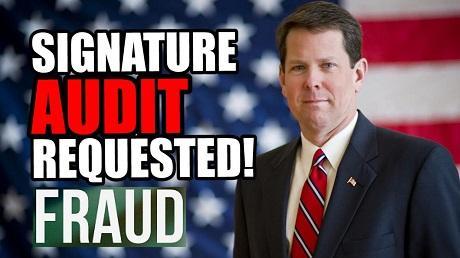 In Georgia, Rudy Giuliani heard from witnesses who detailed alleged instances of voter fraud in the battleground state.

A video of poll-workers who carried suitcases stuffed with ballots captured the attention of the nation as President Trump’s legal team presented further evidence of voter fraud.

On Thursday, the President’s attorneys Rudy Giuliani and Jenna Ellis questioned witnesses in the Peach State. Witnesses alleged the election results were undermined by rampant fraud.

The Trump campaign posted a video of One America’s coverage of the hearing. The mainstream media chose to ignore the fact-finding session.

The only thing more RIGGED than the 2020 Presidential Election is the FAKE NEWS SUPPRESSED MEDIA. No matter how big or important the story, if it is even slightly positive for “us”, or negative for “them”, it will not be reported!

Some of them were even forced to evacuate over false alarms of a burst pipe, but Pick provided testimony of what actually happened on Election Day.

Video footage from Georgia shows that poll workers were told to stop counting and leave, while 4 people stayed behind to continue counting ballots in private pic.twitter.com/bEYdFMAvsa

“Not everybody left according to plan and some people stayed behind, so this shocked them,” Pick stated. “They returned to State Farm Arena at about one o’clock in the morning, where they confirmed that in fact, people had just left… in contradiction with what they were told by those supervising.”

One witness noted that not only did 2,506 felons vote illegally, but 66,248 underage individuals did as well. The law requires voters to be 17.5 years old to legitimately vote, but thousands were able to vote before their 17th birthday.  He also added that at least two thousand individuals were not listed as registered voters.

The examples continued to pile up from there. Notably, Georgia’s current election results show Democrat nominee Joe Biden with just a 13,000 vote lead.

In the meantime, protesters gathered outside of the Atlanta Court House ‘Stop the Steal’ event. Thursday’s event showed support for President Trump while casting doubt on the number of votes in favor of Joe Biden.

“I’m out here to support the Stop the Steal movement,” a demonstrator said. “I believe in what President Trump has been doing for the last four years, like I said, this country has prospered.”

In an interview Thursday, Georgia Governor Brian Kemp called for more transparency in the state’s election system. He added he believes a signature audit must be carried out for the 2020 elections.