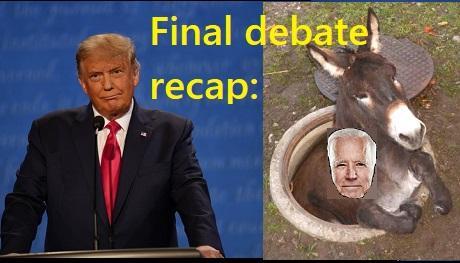 Final debate recap: Trump Was in Command While Biden Told a Bunch of Whoppers. Trump did a good job of standing back and letting Biden dig himself into a hole.

Democratic nominee Joe Biden lied his way through the final presidential debate with President Donald Trump. NBC News correspondent Kristen Welker interrupted Trump more than she interrupted Biden, and Biden was the first person to interrupt a fellow candidate on the stage. Nevertheless, this debate proved far more civil than the first debate.

Trump cleaned Biden’s clock on a few issues, while Biden more frequently hoisted himself on his own petard. The president did a good job of standing back and letting Biden dig himself into a hole. When Trump called him out on previous statements Biden had made, the Democrat merely claimed he never made those statements.

Trump put the Democrat on the defensive even before the debate began by bringing Tony Bobulinski to the debate as his guest. Bobulinski is the CEO of Sinohawk Holdings, a company he founded with CEFC China Energy and the Biden family. He came forward on Thursday to corroborate the damning emails discovered on Hunter Biden’s laptop.

Among other things, Bobulinski claimed that Joe Biden was personally involved in the nefarious business deals Hunter Biden and James Biden (the then-vice president’s brother) undertook in foreign countries like Ukraine and China.

“What he said was damning. Regardless of me, I think you have to clean it up and explain it to the American people,” Trump told Biden.

The Democrat responded by claiming, “I have not taken a single penny from any country whatsoever, ever.” He also attacked Trump over a bank account that paid the Chinese government nearly $200,000 in taxes between 2013 and 2015, before Trump was president.

This was a non-sequitur because Hunter Biden (and allegedly Joe Biden himself) raked in cash from China while his father was vice president and the Obama point person on China and without experience in the industries involved. As for Trump, a Trump Organization lawyer said the company paid taxes to China after opening an office in the country to “explore the potential for hotel deals in Asia.” Not only was Trump a private citizen at the time, but he has experience in real estate.

Yet Biden proceeded to make an utterly outrageous lie.

“My son has not made money in terms of this thing you’re talking about, China,” Biden insisted. He claimed that “the guy who got in trouble in Ukraine” was President Trump, whom Biden accused of “trying to bribe” the Ukrainian government to dig up dirt on Biden.

.@JoeBiden: "My son has not made money in terms of this thing about... what are you talking about... CHINA."

Biden’s claim that his son has not made money in China is utterly, disgustingly false. In fact, there’s an entire movie about it!

When it came to the coronavirus pandemic, Joe Biden denied flip-flopping on Trump’s January ban on travel from China.

“He said — this is a terrible thing — ‘You are a xenophobe.’ I think he called me a racist, even, and because I was closing [travel with] China. Now he says I should have closed it earlier,” Trump said.

“I didn’t say either of those things,” the Democrat responded.

Yet Biden did oppose the ban in January. He said that the pandemic “is no time for Donald Trump’s record of hysteria and xenophobia, hysterical xenophobia, to uh, and fearmongering.” In April, however, Biden’s campaign acknowledged that banning travel from China was a smart decision: “Science supported this ban, therefore he did too.” Biden did a clean one-eighty.

In one of the most egregious moments, Biden attempted to blame Trump for every single death from COVID-19. He mentioned that more than 200,000 Americans have died from the coronavirus, and declared, “Anyone who’s responsible for that many deaths should not remain as president of the United States of America.”

It is absurd to suggest that Trump is responsible for every death.

As Trump pointed out, the Obama administration flubbed the H1N1 swine flu pandemic. He argued that if H1N1 had been as lethal as COVID-19, “700,000 people would be dead right now.” Indeed, as PJ Media’s Matt Margolis reported, COVID-19 is nearly four times more infectious and 13-20 times more deadly than H1N1.

Biden’s former chief of staff, Ron Klain, admitted it was the result of “luck” that more people didn’t die because they did “every possible thing wrong” with H1N1. As Vice President Mike Pence pointed out in his debate with Kamala Harris, 60 million Americans had contracted the swine flu, compared to the 7.5 million who had contracted COVID-19 (the number now is 8.45 million).

Joe Biden was so shameless on Thursday that he repeated a claim that PolitiFact rated the “Lie of the Year” in 2013. Former President Barack Obama repeatedly promised, “If you like your health care plan, you can keep it” under Obamacare. It didn’t exactly pan out that way.

Yet Biden — who ostensibly might remember 2013 because he was serving as vice president that year — claimed that not a single person lost his or her health insurance under Obamacare.

It remains unclear whether or not people might lose their insurance under the Democrat’s plan, but it is one hundred percent certain that millions of Americans lost their health care plans under Obamacare.

Analysts estimated that at least 4 million Americans lost their health insurance under Obamacare.

Yet Joe Biden thought he could repeat the false Obamacare claim that got branded “the Lie of the Year” in 2013.

.@JoeBiden claims no one lost their private insurance under Obamacare and says there's "no way" @realDonaldTrump can protect preexisting conditions. pic.twitter.com/EGZQWpvDlT

Biden: ‘Not a Single Person on Private Insurance’ Lost It ‘Under Obamacare’ Fact Check: FALSE

When the debate pivoted to climate change, President Trump nailed the basic issue. “We have done an incredible job environmentally. We have the cleanest air, the cleanest water, and the [lowest] carbon emission[s] that we’ve seen in many, many years. And we haven’t destroyed our industries,” he declared.

President @realDonaldTrump: We have done an incredible job environmentally, without destroying our industries#Debates2020 pic.twitter.com/zHZlZBwFoq

Biden, on the other hand, blatantly lied about his record on banning hydraulic fracturing, commonly known as “fracking.”

“I have never said I oppose fracking,” the Democrat insisted.

“You said it on tape,” Trump responded.

“Show the tape, put it on your website,” Biden said.

“The fact of the matter is he’s flat-out lying,” the Democrat insisted.

“I do rule out banning fracking,” Biden said. “What I will do with fracking over time is make sure we can capture the emissions from the fracking.”

Trump had to get the last word. “He was against fracking, he said it… until he got the nomination, went to Pennsylvania. But you know what, Pennsylvania, he’ll be against it very soon, because his party is totally against it.”

Biden attempted to claim that he only opposed fracking “on federal land.”

.@JoeBiden: "I have never said I oppose fracking."

Biden has previously said "no new fracking" during the primary debates, but has since backed off after securing the nomination. pic.twitter.com/avmfr1JnbK

President Trump did not wait until Friday to post the video, however. He tweeted a video of both Biden and Harris promising to ban or “phase out” fracking and fossil fuels.

Biden Flip-Flops on Fracking, Now Says He Won’t Put 1.7 Million Workers Out of a Job

In one of the most notable moments of the debate, Biden argued that Hunter Biden’s laptop was a “Russian plant,” and Trump responded with the kind of mockery such a statement deserves.

“There are 50 former national intelligence folks who said that this, what he’s accusing me of, is a Russian plant,” Biden said. “What he’s saying is a bunch of garbage.”

Biden on Trump calling Hunter’s computer “the laptop from hell”:

“There are 50 former national intelligence folks who said that what he is accusing me of is a Russian plant.” pic.twitter.com/JqFhGocxt0

Biden’s horrendous lies cannot distract from the fact that new evidence is implicating him in his son’s notorious corruption. Both DNI John Ratcliffe and the FBI have said the laptop is not Russian disinformation. Rep. Jim Jordan (R-Ohio) has claimed that his staff independently verified it. On Thursday, former Hunter Biden associate Bobulinski confirmed many of the most damning details revealed in Hunter Biden’s emails on the laptop.

The Hunter Biden scandal is not going away. Ironically, Biden was the first one to bring it up, and he fell into trap after trap on the issue.

Thankfully, Trump knew when to keep quiet and let his opponent hoist himself on his own petard.