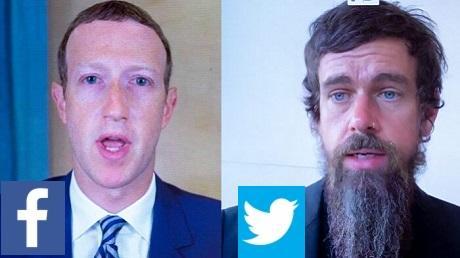 Facebook, Twitter: "no evidence of Russian involvement on Biden scandal". There Is No Evidence of ‘Russian Disinformation’ on Biden Emails.

Twitter CEO Jack Dorsey and Facebook CEO Mark Zuckerberg, during a Senate hearing, said they received no reports or evidence suggesting that reports about Hunter Biden’s alleged emails and overseas business dealings were part of a Russian disinformation plot, as claimed by Democrat Joe Biden and his allies in recent weeks.

He later explained that Twitter blocked the NY Post’s initial report because Twitter “believed it fell afoul of our hacking materials policy,” adding: “We judged in the moment that it looked like it was hacked materials … we updated our policy and our enforcement within 24 hours.”

Johnson then asked Zuckerberg whether the alleged Hunter Biden emails and related claims were part of a Russian disinformation campaign.

“Senator, as I testified before, we relied heavily on the FBI’s intelligence and alerts to us, both through their public testimony and private briefings and alerts they gave us,” the Facebook boss said in response. “It’s not up to us either to determine whether it’s Russian interference nor whether it’s true,” he added.

The assertion that it is Russian disinformation came from a suggestion made by Rep. Adam Schiff (D-Calif.), the House Intelligence Chairman, who told CNN earlier this month that the NY Post’s reports and claims made by New York Mayor Rudy Giuliani that suggested Joe Biden profited via his son through a series of questionable business ventures in Ukraine and China were a “smear” from “the Kremlin.”

Later, Director of National Intelligence John Ratcliffe told Fox News that he’s received no information that it’s part of a Russian disinformation plot and flatly denied Schiff’s allegations. The FBI later said it had nothing to add to Ratcliffe’s assessment.

Joe Biden, who has denied the NY Post’s reports, repeated Schiff’s claim during the final presidential debate that its Russian disinformation. However, neither Biden, his campaign, nor a representative for Hunter Biden have disputed the authenticity of the emails.

In mid-October, Twitter announced it changed its policy following backlash of its perceived censorship of users who shared the NY Post’s report, including White House press secretary Kayleigh McEnany and a Trump campaign account. “While we’ve updated the policy, we don’t change enforcement retroactively. You will still need to delete the Tweets to regain access to your account,” a Twitter spokesperson told the NY Post on Oct. 15.

A spokesman for Facebook said that the company would limit the reach of the NY Post’s article.

“While I will intentionally not link to the New York Post, I want to be clear that this story is eligible to be fact-checked by Facebook’s third-party fact-checking partners. In the meantime, we are reducing its distribution on our platform,” posted Facebook spokesman Andy Stone on Twitter on Oct. 14.