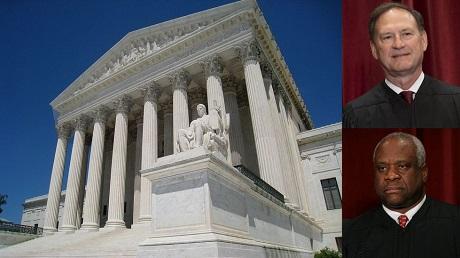 On Monday, the Supreme Court threw out several of the remaining challenges to the 2020 presidential election as moot, considering that former President Donald Trump conceded to Joe Biden, who has now become president. Yet Justices Samuel Alito and Clarence Thomas dissented, arguing that the Supreme Court should have taken the opportunity to clarify election law, especially in the case of Pennsylvania.

“The Constitution gives to each state legislature authority to determine the ‘Manner’ of federal elections,” Thomas wrote. “Yet both before and after the 2020 election, nonlegislative officials in various States took it upon themselves to set the rules instead. As a result, we received an unusually high number of petitions and emergency applications contesting those changes.”

“That decision to rewrite the rules seems to have affected too few ballots to change the outcome of any federal election. But that may not be the case in the future,” Thomas argued. “These cases provide us with an ideal opportunity to address just what authority nonlegislative officials have to set election rules, and to do so well before the next election cycle. The refusal to do so is inexplicable.”

Alito also wrote a dissent, which Justice Neil Gorsuch joined. Alito argued that these cases “present an important and recurring constitutional question: whether the Elections or Electors Clauses of the United States Constitution… are violated when a state court holds that a state constitutional provision overrides a state statute governing the manner in which a federal election is to be conducted. That question has divided the lower courts,* and our review at this time would be greatly beneficial.”

“Now, the election is over, and there is no reason for refusing to decide the important question that these cases pose,” Alito argued. While a decision in these cases “would not have any implications regarding the 2020 election,” it would “provide invaluable guidance for future elections.”

Alito dismissed the argument that this case only arose given the COVID-19 pandemic and therefore does not present ongoing issues. He noted that the Pennsylvania Supreme Court used a constitutional provision guaranteeing “free and equal elections” to “override even very specific and unambiguous rules adopted by the legislature for the conduct of federal elections.” This broad overreach arguably sets a dangerous precedent. Alito noted that “in order for a question to be capable of repetition, it is not necessary to predict that history will repeat itself at a very high level of specificity.”

Alito also dismissed as “highly speculative” the prediction “that the Pennsylvania Supreme Court will not find that conditions at the time of a future federal election are materially similar to those last fall.” He also noted that the primary election for Pennsylvania congressional candidates will take place in a mere 15 months. “We may hope that by next spring the pandemic will no longer affect daily life, but that is uncertain.”

“For these reasons, the cases now before us are not moot,” Alito argued.