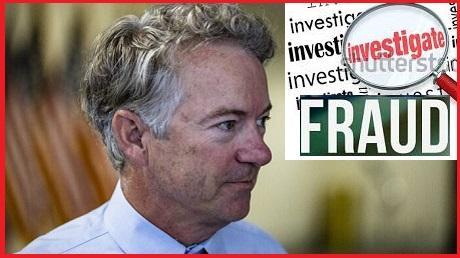 Sen. Rand Paul (R-Ky.) says he isn’t ruling out filing an objection to electoral votes during the joint session of Congress on Jan. 6, 2021.

“We’re still looking at all the legal stuff that’s happening with the legal cases and we’ll make our decision after we’ve seen all the legal challenges,” the senator told CNN on Dec. 10.

Sen. Ron Johnson (R-Wis.) recently told reporters that he’s leaving the option open as well. Johnson, the chairman of the Senate Homeland Security and Governmental Affairs Committee, this week will hold the first congressional hearing on the election, citing “irregularities.”

The joint session features both bodies of Congress meeting to count electoral votes.

Congressional rules enable a U.S. representative and senator to join together to file an objection to the electoral votes from a state during the session. Rep. Mo Brooks (R-Ala.), Rep.-elect Barry Moore (R-Ala.), and Rep.-elect Marjorie Taylor Greene (R-Ga.) have said they are planning to file objections.

The group has been reaching out to senators to try to convince at least one to join the effort, but no senators have pledged publicly that they will do so as of yet.

The Epoch Times reached out to the offices of all Republican senators and senators-elect to inquire whether the lawmakers had been in touch with the group and whether they would consider joining them. The only on-the-record response was from a spokeswoman for Sen. Mitt Romney (R-Utah), who referred to comments the senator made to reporters, calling the effort “madness.”

“It would be saying, ‘Look, let’s not follow the vote of the people, let’s instead do it [sic] what we want.’ That would not be the way a democratic republic ought to work,” Romney said.

Senators told Politico that they didn’t think another brief would have made a difference.

“They signed on to an amicus brief in the House. There’s no version of that in the Senate,” said Sen. Marco Rubio (R-Fla.). “Amicus briefs can be important, but on a matter of this magnitude, I think the Supreme Court is going to make its decision whether or not it’s going to take the case based on the Constitution.”

Others criticized the suit itself.

Sen. John Cornyn (R-Texas) said the lack of a brief from any senators “reflects skepticism about the legal theory about whether one state or a group of states can challenge state elections,” while Sen. Ben Sasse (R-Neb.) called the suit “a PR stunt.”