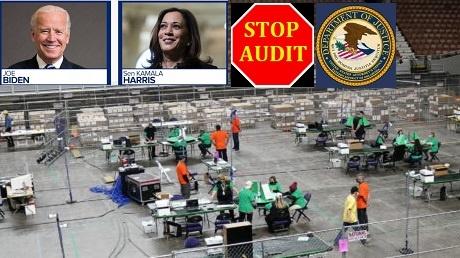 There’s breaking news out of Maricopa County, Arizona where Biden administration officials are attempting to insert themselves into the ongoing ballot audit despite lacking the authority to do so.

The Arizona election audit is no stranger to opposition and May 5 proved no exception. The civil rights division of the Department of Justice sent a letter to Arizona Senate President Karen Fann expressing concerns over the review.

The letter appears to be prompted by an April 30 letter from the Brennan Center, a far-left liberal group, to the Department of Justice asking them to intervene in the audit.

It appears the DOJ took the Brennan Center’s request to heart because their letter Wednesday asked for the state Senate’s “response to the concerns described herein, including advising us of the steps that the Arizona Senate will take to ensure that violations of federal law do not occur.”

BREAKING: Following our letter to DOJ (with @BrennanCenter & @protctdemocracy), the Civil Rights Division is asking the AZ Senate president to respond to concerns about the security of ballots & potential voter intimidation in the Senate's election audit. https://t.co/LdiPZPdSCW pic.twitter.com/oSKbpajg0C

— The Leadership Conference (@civilrightsorg) May 6, 2021

The United States Constitution grants the power to oversee elections exclusively to state legislatures, meaning the federal government has no authority to interfere in the audit. The letter was fairly benign and only cited media reports as evidence.

The main issues raised were with regard to voting rights, especially for minority voters, and the security of the facility, both of which have been easily addressed by the Senate. In fact, the letter did not include a single piece of factual evidence on which the DOJ could base their concerns.

Further, Democrats have sued the Senate four times in an effort to stop the audit and have failed every time. The Department of Justice’s letter appeals to the exact same concerns as those raised in court, meaning the Senate has four court opinions that they can send to the DOJ to refute their claims and say their concerns are baseless at this time.

The fact that the DOJ sent the letter at all is odd given the strict constitutional differentiation from state and federal rights. It’s a strange appeal that comes across as a “hail Mary” from Democrats looking to impede the audit. Like all previous attempts, however, this is also unlikely to be successful.

A reporter watches the Maricopa County ballots cast in the 2020 general election being examined and recounted by contractors working for Florida-based company, Cyber Ninjas, who was hired by the Arizona State Senate at Veterans Memorial Coliseum in Phoenix, Thursday, April 29, 2021. (Rob Schumacher/The Arizona Republic via AP, Pool)