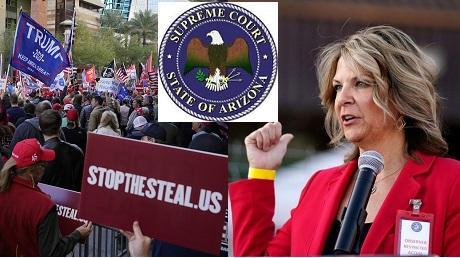 Ward told local station KTAR-TV that she filed an appeal with the Arizona Supreme Court on Dec. 4 to reverse the state’s certification. The court confirmed that it received her appeal on Monday, saying it would decide the matter without an oral argument, the news outlet reported.

It came after a Maricopa County judge ruled that Ward’s petition failed to prove any fraud occurred when she tried to challenge the results in the county, which includes Phoenix.

On Nov. 30, Arizona Gov. Doug Ducey and Attorney General Mark Brnovich signed off on Secretary of State Katie Hobbs’ certification of the election results. All three officials said they have seen no evidence of fraud that would overturn the election results in the state.

The GOP’s lawsuit pertains to Maricopa County, which Democrat Joe Biden won by 45,000 votes, according to state election data. Biden, according to the data, is leading Trump by about 10,457 votes in Arizona.

Ward, in a Twitter post on Monday, wrote that the ballot rejection rate for mail-in ballots in Maricopa County is unusual.

“Almost 2 MILLION absentee/early ballots returned in Maricopa Co & only 600 were rejected for signature mismatch. SIX HUNDRED. Why pretend to check?” she said.

In a video posted on Twitter, Ward said the Maricopa County judge, Randall Warner, was acting under a “self-imposed deadline,” prompting the GOP’s appeal to the state’s highest court.

Ward again said the petition is asking the court to review 28,000 duplicated ballots, as well as digitally adjudicated ballots, that were cast in Maricopa County. She estimated that more than 100,000 ballots are at stake.

The mainstream media, she added, is erroneously attempting to characterize the lawsuits filed by Republicans as attempts to steal the election.

“We are trying to have integrity in our electoral process,” she said, adding: “We have every right to make legal challenges.”

She also called on the Arizona legislature to call a special session about whether to reclaim their constitutional authority to send electors, as Trump’s lawyers have suggested in recent weeks.

Over the past weekend, the Arizona State House announced it would close for a week due to CCP virus concerns.