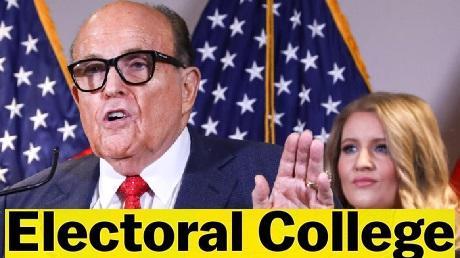 AR, GA, MI may name electors. Rudy Giuliani: Legislatures in Arizona, Georgia, and Michigan might end up deciding what electors are sent to the Electoral College.

President Donald Trump’s lawyer Rudy Giuliani said Sunday that the legislatures in Arizona, Georgia, and Michigan might end up deciding what electors are sent to the Electoral College, suggesting it could end up in the U.S. Supreme Court.

Giuliani said that the GOP-controlled legislatures in the three states could vote on sending their own slate of electors, noting that such a move is supported in the U.S. Constitution. Both Giuliani and fellow Trump lawyer Jenna Ellis have lobbied state legislatures in recent days to reaffirm their power to choose their own electors due to evidence of fraud during the Nov. 3 election.

The former New York mayor told Fox Business on Sunday that Georgia lawmakers “started a petition to hold their own session, which they’re allowed to do under the Constitution,” adding the GOP members are “disgusted” by the evidence that was shown during a hearing last week.

On the program, Giuliani made reference to the State Farm Arena surveillance video in Atlanta that showed election officials pulling black containers on wheels from underneath a table after poll observers and election workers were sent home. While state elections officials have said the process was not unusual, they have not yet answered key questions raised by Trump’s team when presenting the video.

“Michigan is considering the same thing,” Giuliani said. “They’re not quite as far along, but they are drafting something right now, and so is Arizona, so those three … could very well end up in front of the legislature to decide who the electors are.”

In the interview, Giuliani said that should even one “of these state legislatures change the electors based on their own analysis, of course that’ll be taken to the Supreme Court and the Supreme Court will have to decide if it was done reasonably, rationally, or arbitrarily—that’s the standard.”

“In each case, each one of these legislatures has more than enough of that to sustain the Supreme Court challenge,” Giuliani added.

Pennsylvania state lawmakers last week sent a letter to the Pennsylvania Congress members to object to the state’s Electoral College vote during the Joint Session of Congress on Jan. 6, 2021, claiming that the state legislature does not have the power to choose electors in Pennsylvania.