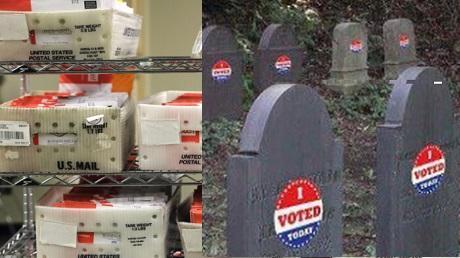 Nearly 350,000 dead registrants remain on voter rolls across 41 states, according to an audit (pdf) conducted by the Public Interest Legal Foundation (PILF).

The number is a major improvement over the last time an assessment of similar scope was performed in 2012, when a Pew Research report turned up 2 million deceased voters on the rolls.

In the 2016 and 2018 elections, states credited 14,608 registrants for voting after death, the PILF report found. The foundation didn’t count cases where votes could have been cast by living registrants during the early or absentee voting periods.

North Carolina led the United States in both 2016 and 2018 in the number of votes credited to deceased registrants. The second-worst states in both elections registered three times fewer votes cast by dead registrants.

With less than two months left before Election Day in November, the report is a major contribution to the argument about mail-in voting. Supporters of vote-by-mail say it is more essential than ever in 2020 due to concerns about the spread of COVID-19. Opponents say universal mail-in ballots open the door for fraud and undermine confidence in the outcome of the election.

“The timing is critical. Partisan advocates have fought for automatic vote-by-mail systems in which all registered voters are sent ballots. These efforts must assume the voter rolls are accurate enough to sustain this sort of radical transformation to how we conduct elections. They are not,” PILF President J. Christian Adams wrote in the introduction to the report.

Some 100 million voters will receive either ballots or ballot request forms in the mail, according to a tally maintained by The Washington Post. Early and absentee voting has already begun in some states.

The PILF audit combined voter roll data from 42 states into a database where each registrant and vote could be cross-referenced to detect duplicate votes cast from the same address and spot registrants who appear to have voted more than once in their state or across state lines.

The report also found 8,360 voters who appear to be registered in two states and voted in both. An additional 5,500 voters were apparently registered at two addresses in the same state and voted from both, according to the PILF.

The Trump administration embarked on a similar audit in 2018 with the formation of the Presidential Advisory Commission on Election Integrity. The commission was forced to disband after facing coordinated resistance from state officials who stonewalled requests for voter roll data. Adams, who was part of the commission, in 2019 picked up where the commission left off.

Three states sued to prevent their data from being released: Illinois, Maine, and Maryland.

President Donald Trump has repeatedly criticized the potential for fraud in a mass mail-in vote election. He has instructed voters in North Carolina to vote by mail and then attend a polling place on Election Day to check if their mail-in ballot had been counted and, if it was not, to cast a vote in person. The PILF report found that 22 percent of the double vote credits in Arizona’s 2016 election were due to mail-in and subsequent in-person vote combinations.