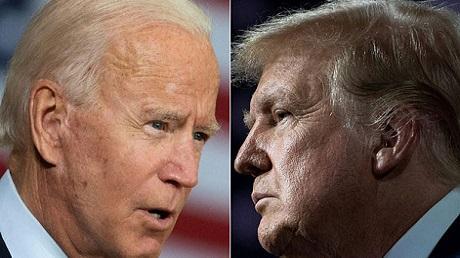 1st debate: Trump vs Wallace/Biden. Trump on Debate: 'Two On One Was Not Surprising'. 'Chris had a tough night,' Trump wrote on Twitter.

“Two on one was not surprising, but fun.”

Trump regularly interrupted former Vice President Joe Biden during the debate, which was followed by an interruption from Wallace to follow the rules.

Biden also told the president to “shut up” and described Trump as a “clown,” and “the worst president America has ever had."

Biden even called Trump a "racist."

Trump also took aim at Biden, describing him as "not smart."

“Don’t ever use the word smart with me,” Trump said.

“Nothing smart about you Joe.”

Trump also highlighted Biden's attempt to distance himself from the radical left's ideology.

“Many important points made, like throwing Bernie, AOC PLUS 3, and the rest, to the wolves!” Trump wrote.

Nobody wants Sleepy Joe as a leader, including the Radical Left (which he lost last night!). He disrespected Bernie, effectively calling him a loser!

The President also retweeted criticisms emulating from the backlash against Wallace on Twitter.

Above is a photo shared by Trump of the matchup between him and the team of Wallace and Biden.

Wallace, a Democrat, was accused of bias while moderating the debate after he appeared to side with Biden.

At one point, President Trump argued that he felt like he was debating Wallace rather than Biden.

One of the issues that Wallace was called out for the most was how he appeared to let Biden interrupt Trump.

Fox News host Brian Kilmeade even noted the discrepancy and called it out on social media, writing:

“Why is @JoeBiden allowed to interrupt? @realDonaldTrump is not.”

Why is @JoeBiden allowed to interrupt? @realDonaldTrump is not