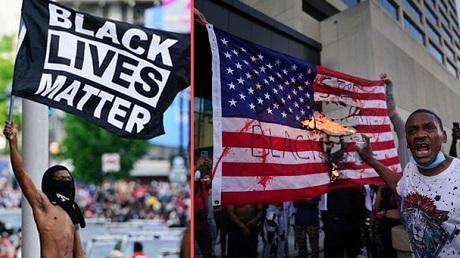 Schools to fly BLM/gender ideology flag symbols: Schools are being ordered to start flying Black Lives Matter flags in support of the radical-left organization, according to reports.

The Vermont Essex Westford School District Board voted unanimously vote that each of its schools will fly a Black Lives Matter (BLM) throughout the 2020-2021 school year.

The move has triggered outrage as the push to promote BLM's Marxist propaganda is now taking over children's education.

Each flag will be raised on Thursday along with LGBTQ flags, News Break reported.

The event will be live-streamed on Facebook and the community is not allowed to attend to it due to COVID-19 restrictions.

The LGBTQ Pride and BLM flags will fly over all public schools in Clarendon, North Clarendon, Shrewsbury, Wallingford, and Tinmouth, Vermont.

"That flag pole should have the U.S. flag and the Vermont state flag on it, period,” said Republican Art Peterson, who is running for the statehouse.

"I’m disappointed that one person can come in, make a request of this nature and the board automatically decides to do it,” he told the Rutland Herald.

"Those flags both have a political meaning and those things have meaning to people.

"When you introduce politics into the schools, these symbols, where does it stop?”

The controversial anti-American decision by the school board comes after a single student requested the flags be flown, according to News Pushed.

High school senior Reese Eldert-Moore raised the matter and can be said to be the responsible party who got the ball rolling on this decision.

“When I attended Mill River, students would use hateful terms and slang constantly, whether they knew it or not,” Mill River Union High 2015 graduate Christian Brand told VTDigger.

"Imagine how I and others would have felt if we saw a Pride flag wave across the school grounds?

"How we could have been given the chance earlier to be ourselves and thrive.”

Supt. Dave Younce made what many believe to be an incorrect and ignorant statement when he told television station WCAX that the board made the right decision by allowing this atrocity.

He said politics is not in play when it comes to flying the BLM and LGBTQ flags.

“I believe at Mill River our job is to support people and to make our students belong there and anything that can do that in a visible, tangible way is better than has done in the past and we all want to do better than we have in the past, so that’s the way I see it,” Younce said.

Arthur Peterson, who is running for the Vermont House of Representatives, helped put together a petition to stop the proposal.

The petition quickly got 500 signatures.

“We need to bring up our kids in a way that doesn’t subject them to this,” he said at a June 25 Community Engagement Committee meeting on Zoom.

What is next? Will students soon be required to burn the American flag but stand for the BLM and LGBTQ flags?

It sure seems like a possibility at the rate things are deteriorating.