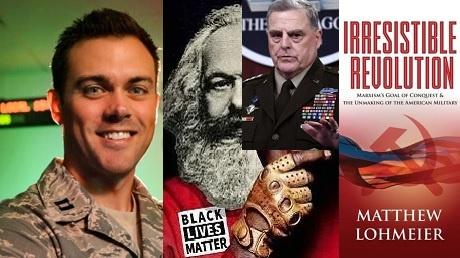 The Space Force officer who was removed from his command post for condemning Marxism and critical race theory is leaving the military.

Lt. Col. Matthew Lohmeier told The Epoch Times’ “American Thought Leaders” that his last day in the service will be Sept. 1.

“I wrote a letter to then-Acting Secretary of the Air Force explaining certain circumstances, which I don’t plan to make public, but also requesting an early retirement, and a separation honorably from the service,” he said. “And they’ve denied me an early retirement, but agreed that they would separate me. And so my family and I have decided that that’s the best course of action for us right now, given the circumstances.”

“I believe I’m able to continue serving my country outside of the service and out of uniform, perhaps in a better way than I was able to, given the circumstances, in uniform at the moment,” he added.

He’s received a slew of invitations to various events and conferences in recent months.

Lt. Gen. Stephen Whiting, Space Operations Command commander, relieved Lohmeier of his command of a squadron in May “due to loss of trust and confidence in his ability to lead,” the Space Force said at the time.

Whiting made the move because of remarks Lohmeier made on a podcast. He also ordered an investigation into whether the comments constituted prohibited partisan political activity.

Lohmeier published a book warning about the spread of Marxism and critical race theory in the military and was on the podcast promoting the book.

During the appearance, Lohmeier claimed that Defense Secretary Lloyd Austin was promoting “diversity, inclusion, and equity,” which he and others have said are “rooted in critical race theory, which is rooted in Marxism.”

Multiple members of Congress spoke out against what happened, including Sen. Jim Inhofe (R-Okla.), the top Republican on the Senate Armed Services Committee.

“Based on the information the committee has received so far and what’s been reported in the press, I am concerned,” Inhofe said at the time. “Members of our military should not only be able to speak out against Marxism, but they should be encouraged to do so—as long as they follow the rules and laws already in place. Marxism is an ideology that goes against everything this country stands for, and it belongs, as Ronald Reagan said famously, ‘on the ash-heap of history.'”

Lohmeier told The Epoch Times that neither his book nor the remarks were politically partisan.

“It’s not politically partisan to expose Marxist ideology where it exists and to talk about critical race theory, that should be something we’re unitedly standing against,” he said.

He also said he attempted before writing the book to utilize internal mechanisms that let service members lodge complaints, but to no avail.

The Space Force and the Air Force did not respond to requests for comment.

Zachary Stieber covers U.S. news, including politics and court cases. He started at The Epoch Times as a New York City metro reporter.

Jan Jekielek. Is a Senior Editor with The Epoch Times and host of the show, “American Thought Leaders.” Jan’s career has spanned academia, media, & international human rights work. In 2009 he joined The Epoch Times full time and has served in a variety of roles, including as Website Chief Editor. He is the producer of the award-winning Holocaust documentary film "Finding Manny."

Cultural Marxism differs from Classical Marxism in its consideration of what constitutes the primary agent of social change that underpins its ideology. The classical variant embraces economic determinism and the social relations that stem from the f...

It’s easy to dismiss anyone querying the Black Lives Matter movement as either pointlessly contrarian or — worse — actually racist. After all, who could object to the truism contained within the movement’s name? But there are important questions...

BLM and the Hammer and Sickle Revolt. Those who believed that the collapse of the Soviet Union meant that communism had ceased to exist, never paid much attention to the Frankfurt School or Antonio Gramsci. The terms “progressive” or “liberal” are ...

Marxism's 'social justice' front. 'Social Justice' Is Extortion. The Mafia is not as good at extortion as “social justice” activists. Feminists and race activists have successfully invoked moralism to demand preferences, special benefits, and power...

Trump, the Frankfurt School and the Counterrevolution: A Manifesto. Trump’s victory is really an extraordinary event. It will be the subject of studies and research of political scientists, sociologists and academics for years to come. I supported...