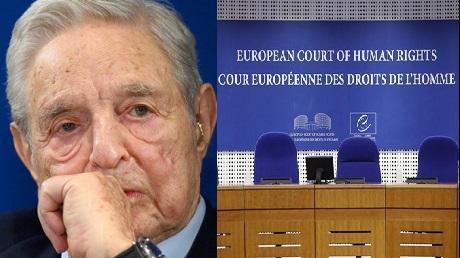 According to a ground-breaking report from the European Centre for Law and Justice, a network of non-governmental organizations financed by George Soros has gained enormous influence in the European Court of Human Rights (ECHR).

The court essentially sets many of the laws related to gender, immigration, and religion across Europe.

The report details how the objective for the ECHR is now to promote and enforce an “open society” - the ideology championed by liberal financier Soros.

Soros has become the master of “causing chaos in the world under the guise of altruism,” according to the French magazine Valeurs Actuelles.

The magazine details how nearly all the judges from the ECHR received funding at some point in their careers from the Open Society Foundations (OSF), which Soros has provided with €18 billion of his own money.

The effect on Europe has been enormous, with the magazine writing:

“Austria, Greece, and Italy are forced to legalize same-sex unions; Poland is urged to promote the right to abortion; France is obliged to authorize the change of sex 'on paper'; Hungary is forced to abolish life imprisonment; Russia is reprimanded for having condemned the Pussy Riot Punk feminist activists; Austria must legalize adoption by same-sex couples; sharia law in Greece is approved.

"Are all of these rulings unrelated? On the contrary.

"Each time, the European Court of Human Rights (ECHR) dictates its law to European countries.

"Each time, the European Court of Human Rights (ECHR) dictates its law to a European country and each time, an NGO linked to the Open Society Foundations (OSF) network is involved in the case.”

Grégor Puppinck, director of the European Centre for Law and Justice, says that many of the judges on the ECHR are directly linked to Soro’s Open Society Foundation.

The report indicates that it is no coincidence that so many countries are legalizing same-sex unions, same-sex adoption of children and abortion-on-demand.

All of this is happening with the assistance of the ECHR, especially judges who have close links to Soros-backed organizations.

Hungarian academic András Sajó, a friend and employee of Soros, worked for the ECHR

The case of Hungarian academic András Sajó, who was one of the founders of Soros’s Central European University and a long-time friend of Soros, serves as a prime example.

Three years after his role in the Open Society Foundation, he became a judge in the ECHR and played a pivotal role in Italy’s “Crucifix affair,” which saw the Court ruling that crucifixes are not permitted to be displayed in Italian public schools.

The decision was later reversed on appeal with the help of Grégor Puppinck, lawyer and director of the French European Centre for Law.

After this victory, the Italian government awarded the French lawyer with the cavaliere della Repubblica, the Italian equivalent of the Legion of Honor.

Puppinck says that such conflicts of interest are not uncommon for ECHR, with a wide array of “Soros judges” working on the issues important to the Open Society Foundation.

Judge Lech Garlicki adjudicated cases of organizations while participating in programs run by his organizations.

These relationships are also present in the judiciary in Poland, including the example of Lech Garlicki, a former constitutional court justice.

Garlicki actually adjudicated on the bench in the ECHR in cases involving Soros-backed organizations, such as the Open Society Institute and The Helsinki Human Rights Foundation, while participating in educational programs run by these organizations.

Puppinick, who has been working on ECHR cases for 20 years and has a good relationship with many of its judges, says the Court has increasingly embraced the ideological viewpoint of the Open Society Foundation in recent years.

As a result, the ECHR’s decisions systematically support the idea that “diversity and multiculturalism are and must remain essential European values.”

Puppinick says that Soros likes to present himself as “a head of state without a state” since he requires no state to carry out his agenda.

Soros knows that the 47 countries that have signed the European Convention on Human Rights are required to make sure their laws are in line with the case law established by the ECHR.

This makes the ECHR a vital point where Soros can influence his agenda without wrangling with democratically elected governments or irksome citizens represented by the 47 states.

Puppinck’s report reveals the ‘Soros judges’ working in the ECHR

Puppinck, who is responsible for the new report on Soros and his influence in the ECHR, sifted through the résumés of the 100 judges that have sat in the ECHR since 2009 in order to identify what their previous NGO links were.

He also used public data he accessed through the Parliamentary Assembly of the Council of Europe.

After six months of meticulous research, and a report supported by 200 pages of appendices, he revealed how George Soros’s network of NGOs has extended their influence over the European Court of Human Rights and subsumed it under their own ideology.

Based on his exhaustive study, Puppinck has found that the ECHR clearly has an imbalance of judges from the Open Society, with 22 of the judges with direct links to the Open Society Foundation and its network.

If the criteria is expanded to those judges with indirect links, such as those that receive funding from Soros’s network, then the number of judges linked to Soros-backed organizations rises dramatically.

The European Court of Human Rights has enormous power

Soros’s return on investment in his connections with ECHR judges has been enormous, as these Strasbourg human rights judges can utilize considerable discretion in cases.

Where national legal systems and courts often have hundreds of years of case law that restrict how judges can rule on a case, Puppinick said to Valuers magazine that the Human Rights Convention is a very short document with very general guidelines, which means ECHR views the Convention as a “living instrument to be interpreted […] in the light of current living conditions.”

“The influence of the judge’s mindset, his ideas, and his training, is considerable,” said Puppinck.

“Human rights as a discipline is strongly ideological in nature. You can make the Convention say one thing and its opposite.

"If a judge believes that the legalization of surrogacy is necessary in the name of freedom, or if, on the contrary, he condemns it in the name of dignity, he can have both said in the same text.”

That means rulings on sexuality, gay marriage, biotechnology, immigration, and family reunification are all mostly left to the interpretation of ECHR.

The judges are selected mainly through a political process, with the body responsible for selecting them, the Parliamentary Assembly of the Council of Europe, known as a very political organization.

The judges also make their political biases clear. In recent years, it has become commonplace for ECHR judges to a rainbow-colored cord supplied by the Council of Europe around their necks.

For more than ten years, these judges have dropped expressions such as “Mrs.” and “Mr.”, saying they are too gendered.

Despite these realities, many in Europe view these judges as neutral arbiters, a viewpoint that lends weight to their decisions.