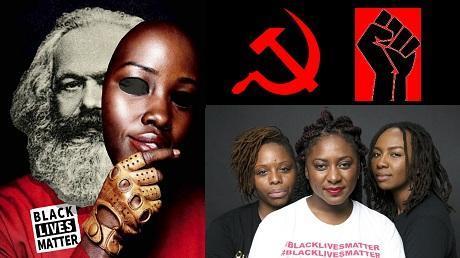 Those who believed that the collapse of the Soviet Union meant that communism had ceased to exist, never paid much attention to the Frankfurt School or Antonio Gramsci. The terms “progressive” or “liberal” are gross misnomers to categorize the ideological current that underpins what is besieging the United States today. A full throttle socialist power grab is taking place. It is being executed under the guise of historical racist determinism, group victimization and guilt transmittal. Documents like “Project 1619”, a fictional account of history premised upon critical racial theory, serve as one of its manifestos seeking to rationalize the needed state of victimhood in this American version of the Paris Commune uprising.

Leading this offensive is Black Lives Matter ("BLM"), a genetically composed DNA-tested Marxist organization committed to the overthrow of the existing social order. In other words, this is not a reform-minded movement working to remedy imperfections of the social compact. BLM is an antisystem radical entity focused on revolutionary jihad which the regrettable death of George Floyd provided a raison d'être for its ensuing prominence. The "reforms" they propose seek to crack the pillars of authority that sustain the American system and that are crucial to the enforcement of the existing state of the rule of law and a free society.

Classical Marxism was premised upon the notion that the economic model and its ensuing relations of production were the primary motor of social change with the ultimate result being that of alienation. Karl Marx and Friedrich Engels envisioned a two-tier class antagonistic battle that purportedly manifested itself cyclically throughout history. In their episode of life, that perceived war was between the worker (exploited) and the capitalist (exploiter). World War I and the material betterment of the working classes destroyed Marx/Engels’ forecast of increasing misery among the workers and their class solidarity. Marxism, as their authors projected, failed miserably in its empirical accuracy. This is where Antonio Gramsci and the Frankfurt School come in and where BLM got its political modus operandi.

The Italian communist (Gramsci) disagreed with the orthodox Marxists and argued that culture and not the economy was the prime determinant of social life. The group of German Marxists that composed the Frankfurt School fully agreed with that notion. Upon coming to the United States fleeing German fascism, Theodor Adorno, Walter Benjamin, Erich Fromm, Max Horkheimer and Herbert Marcuse were shocked and dismayed by the American pop culture they encountered. Quickly this influential intellectual group realized that the likelihood of a socialist class-consciousness being built in America was remote. In the attempt to fortify the tactical understanding that it was in the arena of culture where the battle must be fought, the Frankfurt School inducted Sigmund Freud, his psychoanalytic armory with its sexual underpinnings into the Marxian scheme. Thus, the formal tactical exit of Classical Marxism as the guiding method of political struggle and the prominence of Cultural Marxism in the weaponization of communist subversion was established.

Seminal to this new manner of socialist war-waging, the traditional binomial stratagem of Marxism was altered: the “worker” was replaced by a structured “victim” or marginalized person. This has been used by modern-day communists to mean anyone that could fit in, except, of course, white men who embrace the traditional family format. Legitimate causes and areas of needed betterment are exploited in this quest to involve targeted groups of society and root them apart from the national social fabric. Multiculturalism, mass immigration, radical ecology, gender ideology, radical feminism and racism are some of the realms where, today, Marx’s heirs’ prey upon.

BLM seek, not just the comprehensive dismantling of the free enterprise system, substituted with a socialist directed economy. Their objectives are more ambitious. Marx/Engels always viewed the family and religion with great scorn. They realized that both institutions were formidable obstacles in the pursuit of communism. BLM is at war, not just with Capitalism. It pursues the demise of the traditional family. God and the transcendental order on which the United States was founded, are nonexistent in BLM’s cosmovision. Angela Davis, a former member of the terrorist Black Panther movement, is the intellectual mentor of BLM. Davis was a protégé of Marcuse. BLM is Marxism in action.

Marxism's 'social justice' front. 'Social Justice' Is Extortion. The Mafia is not as good at extortion as “social justice” activists. Feminists and race activists have successfully invoked moralism to demand preferences, special benefits, and power. The Mafia…