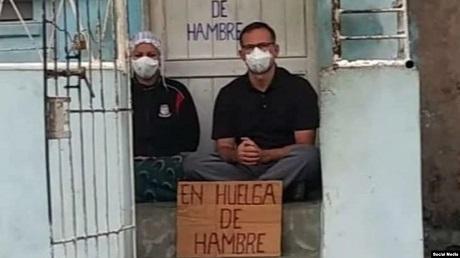 UNPACU in fifth day of hunger strike; the regime hands out "little boxes" to divert attention.

The Patriotic Union of Cuba (UNPACU) entered on Wednesday its fifth day of hunger strike with almost fifty activists planted, while the siege that the political police have been maintaining around the headquarters of the opposition organization, in the Santiago neighborhood of Altamira, for 10 days now, continued.

Activist Ovidio Martin Castellanos, who updated Radio Martí on what is happening at the site, said that the repressors are trying to counteract the humanitarian work of the organization by handing out "little boxes with food" to people in a school next to the UNPACU headquarters.

According to Martin Castellanos, the police siege "is set up as a routine" to prevent UNPACU members and needy people in the community from reaching the site "in search of food and medicine", or to denounce human rights violations.

According to Martin Castellanos, the police siege "is set up as a routine", to prevent UNPACU members and needy people from the community from reaching the site "in search of food and medicine", or to denounce human rights violations.

Although the activist has not been able to determine the number of strikers, he believes there are more than 44.

The political police are completely blocking access to the headquarters and making it difficult to communicate by telephone with those who remain inside. To counteract the effect of the protest, they have begun to distribute food to the people who used to go to UNPACU, around 200, according to Martin Castellanos.

UNPACU leader Jose Daniel Ferrer launched last week the call to protest peacefully through hunger strike against the repression faced by the organization and until the police siege is lifted.

"We are sure that if we get enough support, enough solidarity, the regime is going to have to lift the siege around the Patriotic Union of Cuba (UNPACU)," Ferrer told the independent digital portal CubaNet on Tuesday.

The protest has received the support of other groups and members of the political opposition, inside and outside Cuba, as well as personalities and human rights organizations.

The women's opposition group Damas de Blanco (Ladies in White) expressed Wednesday its solidarity with Ferrer, her family and the activists who remain on hunger strike. The organization condemned "the Cuban regime for the violence ordered and directed" against them and the people who come to the UNPACU headquarters.

(With report by Ivette Pacheco for Radio Martí)