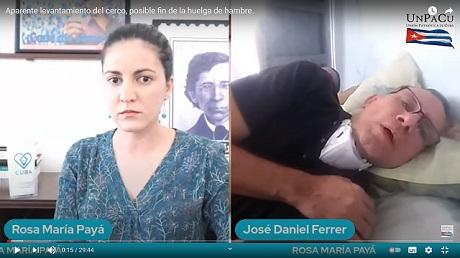 After 26 days of being in place, the Cuban regime would have lifted this Friday the police siege to the main headquarters of the Patriotic Union of Cuba, in Santiago de Cuba, where some of the 25 activists who joined the hunger strike called by the opposition organization remain.

"If so, we could speak of a victory of reason, of justice, of the humanism that characterizes us, against the perversity of the regime that hates its people," said the leader of the opposition movement, José Daniel Ferrer, in a live broadcast via Periscope along with Cuba Decide coordinator Rosa María Payá.

"Our decision is that if this is a real uprising, and not a temporary maneuver with deceitful intentions, the strike will be suspended," Ferrer said.

The opposition leader asked the strikers in the most critical condition to suspend the protest, and those who refuse to do so, to at least maintain a fast with liquid food intake, he said during the broadcast.

According to Ferrer, activists and the population could enter and leave the headquarters this Friday, from approximately 10:30 a.m., without any interruption by police forces.

The UNPACU leader said they would remain attentive to what happens in the coming days, since some repressors were still hiding inside the Pepito Tey school, in the vicinity of the headquarters.

Doctor and activist Nelva Ismarays Ortega had communicated this information to Radio Martí around noon, and stressed that they are currently trying to confirm the lifting of the siege. If true and permanent, the activists would lift the strike, she said.

"We were informed, around half past ten, that two generals from Havana together with the governor of Santiago de Cuba, Beatriz Johnson Urrutia, had taken all the repressive forces that were in the vicinity of the Patriotic Union of Cuba, located on Calle 9 between E and G, Reparto Mármol, here in the Altamira Council, Santiago de Cuba."

Ortega expressed his doubts regarding this information.

"We don't know if it's the end of the encirclement or if it's a trick.

"We don't know if it's the end of the siege or if it's a trick play. We are investigating what has happened,"

On the health of the strikers, Dr. Ortega explained that "the most worrisome and serious cases at the moment are Yoel Acosta Gámez, an HIV patient, from Baracoa, Guantánamo, who has been hospitalized since yesterday (April 8) [...] his defenses are very low, but he maintains his position of not ending the strike."

As for the condition of her husband, UNPACU leader Jose Daniel Ferrer Garcia, he said "he is experiencing severe stomach pains, kidney pains, headache, dizziness, loss of balance and weight, vomiting sensation and maintains blurred vision."

(With reporting by Ivette Pacheco for Radio Martí)