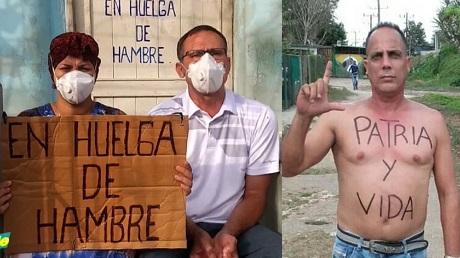 UNPACU activists persist in hunger strike: we will continue protesting against the tyranny's criminal actions

UNPACU leader José Daniel Ferrer said that the members of the opposition group who began a hunger strike on March 20 will continue "protesting against the criminal actions of the tyranny."

"It is our right," he asserted Sunday on Facebook.

"There are more than 60 activists on strike and 4 had to abandon due to their health problems," Ferrer said. "We continue with Patria y Vida."

"Nine days of strike and 14 of police siege," he said after reiterating that the demand is that the authorities stop preventing citizens from reaching the UNPACU headquarters in Santiago de Cuba to receive food and medical attention. "This is a center of freedom."

"Tyranny fears us," Ferrer said. "Gandhi (in India) achieved more with a hunger strike than the United States did with thousands of soldiers in Vietnam."

"Down with communism. Down with hunger and misery," he said.

For her part, art curator and member of the San Isidro Movement, Anamely Ramos, declared on Facebook that "it is time for Cubans to take seriously what we are living. We must no longer turn our faces away from a reality that has left us with no alternative but dignity.

This is what he said after having started a fast on March 26 in solidarity with UNPACU activists.

"After more than 48 hours the body begins to weaken. It is inevitable. It begins to be so evident how fragile is this body of ours that welcomes us and sustains us!" declared Ramos.

"In the Yoruba tradition it is always asked to harmonize the head, the heart and the feet. That third element that is generally forgotten represents for me that part of the body attached to the earth and to the most basic processes of the human being. But it is also destiny, the path you choose, the hardness of the road," said Ramos, who recalled that "today also begins Holy Week."

"We should not be afraid of loneliness. That loneliness also has a little apparent. There is always someone or something that accompanies us. Our being a person is full of plurality, as in those African traditions where the one is multiple, like the mystery of the trinity," he said.

About the other people of UNPACU who are on strike, he said that he tries "to review the names and faces of those I have been recognizing, but there are many missing. We all have to fill those gaps. There are not two or three, there are 65 people at risk. I refuse to believe that our sensibility has suffered so much that not even that moves our hearts".

The tags that accompany his text are: