The embargo HAS worked 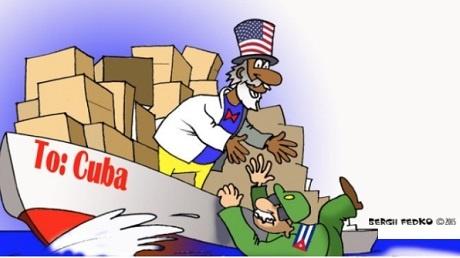 The embargo HAS worked. A few days ago the Foreign Affairs Committee of the U.S. House of Representatives held a hearing ► to discuss the recent rebellion in Cuba.

Among the guests was, in addition to our admired Rosa María Payá, Mr. -should I say compañero?- José Miguel Vivanco, director for the Americas region of the Human Rights Watch organization.

The verb "to watch" in English is to watch, but it is also to look, as when we watch a film with a wax paper tub full of popcorn and a cold soda next to us.

It seems that, with respect to the human rights situation in Cuba, Mr. Vivanco has dedicated himself more to see than to watch. I say this because in his deposition (ambiguity of the term) before the House Committee, Mr. Vivanco devoted a good part of his time to criticize the famous embargo.

Just as I am telling you.

Imagine that a guy robbed the neighborhood bank and the bankers decided not to do business with him anymore.

Imagine that for years that guy laughed at the bankers and promised, absolutely sure of himself, that someday he would be richer than any bank.

Imagine that the years went by and that the guy, far from getting richer, got poorer and poorer, became increasingly indebted and lost his creditworthiness with the rest of the businesses in the neighborhood.

Imagine that this guy was also dedicated to giving his wife and children a severe (again the ambiguity of the term) beating.

One day, the guy's family decided to rise up against so many years of abuse and the neighborhood, in a gesture of solidarity, decided to get together to decide how to help the beaten.

At that meeting came a lookout who, after recounting the beatings, kicks, spits, shots and machetes received by the family, proposed that the solution to these abuses was nothing more and nothing less than that the bankers should go back to doing business with the abuser.

Something similar happened with Mr. Vivanco's statement before the House of Representatives Committee: after saying what we all already know, that is, that human rights are violated in Cuba in a brutal and blatant manner, the representative of Human Rights Watch dedicated himself, without any relevance, to defend the Castroist idea that in order to stop the abuses, the embargo must be removed and the abusers must be empowered even more.

Mr. Vivanco's arguments were the commonplaces that the embargo has not worked, that it allows Castroism to justify its abuses, and that it has isolated the United States in the international arena.

Like any person indoctrinated in the U.S. liberal academy, Mr. Vivanco has an idea of Cuba, probably solidified during his master's studies at Harvard, that is much closer to the propaganda of Castroism, and the gringo left, than to Cuban reality.

To begin with, any moderately informed Cuban can give Mr. Vivanco a list of reasons why the much-vaunted embargo has worked. Off the top of my head, without thinking too much, the following come to mind:

The embargo worked perfectly to demonstrate the stupid economic inefficiency of that criminal scam known as socialism.

The essence of the decisions of the Cuban communists - with Fidel Castro as "poster boy" - that led to the imposition of the embargo, among which the theft of Cuban and foreign properties stands out, was the absolute belief in the economic superiority of socialism and the fact, imagined, that in a few years capitalists would beg to trade with Cuba.

The embargo worked perfectly so that Cuba cost the Soviets, and the socialist camp, more than a dumb son studying at Harvard. Thanks to the embargo, they were forced to spend billions and billions of dollars in Cuba which they never had enough of and, in order to spend them on their Caribbean puppet, they had to stop spending them in truly strategic areas of their economy, a mistake that ended up contributing, who can doubt it, to the final collapse of the USSR and the socialist camp.

The embargo worked perfectly so that Fidel Castro had to swallow his boast and was forced, after decades of saying the opposite, to recognize that socialism is so superior from the economic point of view that in order to survive it needs trade and credits from capitalism.

The embargo worked to save an enormous number of lives throughout the length and breadth of this world; because if the Cuban history of the last sixty years (the real one, not the one they teach at Harvard) teaches anything, it is that every time Castroism had something even remotely resembling an economic bonanza, it used it to sow hatred, violence and death in dozens of countries.

The embargo has worked perfectly to make unobjectionable evidence of the anti-democratic and pro-dictatorial character of the ill-named United Nations Organization. A circus that was already condemned to be what it is today when it decided to welcome Stalin's USSR into its midst. The regime that, in 1933, when the Nazis came to power, had already murdered more human beings than those that Nazism would later murder. The same criminal totalitarianism that divided Europe with Nazism, in the Ribbentrop-Molotov treaty, and that invaded Finland and murdered, in Poland, tens of thousands of Poles in the Katyn forest.

Since its inception, under the aegis of Alger Hiss, Stalin's agent in the Roosevelt and Truman administrations, the misnamed UN was doomed to be what it is today: a forum with more than half of its members classified as totalitarian or semi-totalitarian regimes, and a macabre circus in which the despotisms of Cuba and Venezuela sit on its human rights commission.

The embargo has also functioned to expose the hypocrisy of many nations that claim to be democratic, such as Spain or Canada, and that speak out against the embargo while their companies in Cuba exploit Cubans -thanks to Castro's totalitarianism- in such an inhuman way that those countries would never dare to practice it in their own territory.

The embargo has worked to expose the political blackmail that Castroism imposes on many other countries to vote against or "denounce" the embargo. A blackmail of doctors and professionals offered as carrots; or of sticks insinuated with political destabilizations provoked by pro-Castro organizations and agents.

The embargo has made it clear that the hatred that Castroism has always felt for the free world in general, and for the United States in particular, is irrational. When President Barack Hussein went to Havana and began to dismantle a good part of the embargo, Castroism's response was to attack U.S. diplomats with weapons of neurological destruction.

The embargo has served to illustrate the enormous ignorance that many have about the nature of leftist totalitarianisms. All those who insist that the lifting of the embargo would result in an increase in the well-being of Cubans and that this well-being would inevitably bring about political changes are ignorant of the Leninist theory of revolution.

That theory explains that revolutions happen when poverty is enough to generate discontent, but not when it is so high that people can only think about their survival. A logical colophon of this Leninist axiom is that, once power is achieved, the best way not to lose it is to keep the population in levels of poverty that will never allow them to organize real revolutions, only uprisings.

Extreme poverty is, then, consubstantial to the permanence of the socialists in power; and there is no lifting of any economic sanction that can change that necessity.

Finally, the embargo has worked so that after July 11 we can witness the spectacle of seeing Castroism mobilize its agents of influence, including those at Harvard, to insist that the embargo must be lifted.

It is amusing to see them jump, like rats from the sinking ship, while we eat popcorn and drink a cold soda.

Author: César Reynel Aguilera. Havana, 1963. Physician and biochemist. Writer. Lives in Montreal since 1995. Among his most recent books is El soviet caribeño, a history of the relations between the Castro regime and the Soviet intelligence. César's blog is: https://reynelaguilera.wordpress.com