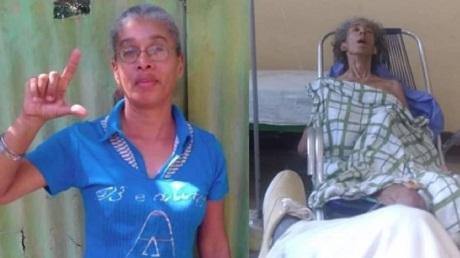 HAVANA, Cuba. - "If they had given her the corresponding medical attention she would not have died", denounces the ex-husband of Jacqueline Borrego Cuesta, the Cuban activist and member of the Movement of Opponents for a New Republic (MONR) who died this Monday "as a result of advanced malnutrition".

Luis Jesús Gutiérrez Campo, who was in charge of the activist's care during her period of prostration, explained to CubaNet that Borrego Cuesta, 48, died in her own home, in the municipality of Marianao.

"She passed away at home around 11:30 in the morning after being from April 14 to 27 in the Military Hospital. Her entire digestive system was badly affected and she was already having difficulties in feeding herself," Gutiérrez Campo explained.

The interviewee also detailed that in the last weeks it was almost impossible to give him water and food, which further aggravated his state of malnutrition. "It was very difficult to give him a cc (cubic centimeter) of water or juice, as well as mashed food," he said.

The interviewee explains that on April 14 his ex-wife was hospitalized due to an eye infection and an advanced level of malnutrition. During her stay at the Carlos J. Finlay Military Hospital in Marianao, Borrego Cuesta received between 10 and 12 intravenous fluids with antibiotics to fight the infection and hydrate her.

Since 2020, Gutiérrez Campos made representations to State institutions with the intention of saving his ex-wife's life, but he confesses that every request "was always in vain".

"I have gone everywhere, including to doctor Rogelio, from office 18, from the area where we live... Man who never accepted to give me a diet that would help me with her diet", he laments.

"You just had to see her in the condition she was in; any citizen would feel sorry for her. In the offices where I went there was no human sensitivity to support her".

Gutiérrez Campos assures that his ex-wife "did not have the (medical) attention she should have had, first of all because on the two occasions she was hospitalized it was for a medical emergency and she was never given a thorough examination".

"In this last admission, from April 14 to 27, is that they give an effective response because I ask for the presence of a clinician and a neurologist (who tells me that) what she suffered was catabolism", assures Gutiérrez Campos.

Since 2018, when Borrego Cuesta became ill, doctors always referred that she had suffered multiple heart attacks. However, the neurologist who attended her during her last admission denied the previous diagnosis, refers the interviewee himself.

"From the first moment I went to the Military Hospital, in 2018, they sent her for a study, and the doctors told me that she had suffered multiple infarctions, without having the results of any analysis or anything. Since then, the same thing kept repeating itself".

Cubanet is a non-profit digital media, dedicated to promote the alternative press in Cuba and to inform about the reality of the island. CubaNet's support for alternative journalism and civil society in Cuba is based on our conception that in any type of regime, civil society is the most effective instrument for individuals to exercise their rights and make a greater contribution to their community, while seeking greater personal well-being. Citizens need to organize themselves in solid institutions to balance the power of government, the most structured social institution.
Prev Next