More than 6 daily protests in Cuba in April 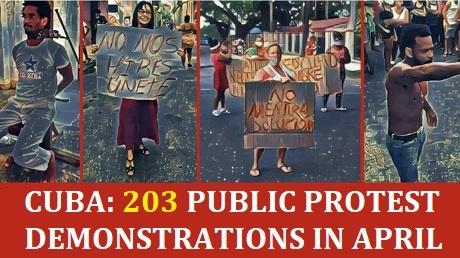 More than 6 daily protests in Cuba in April: More and more Cubans refuse to collaborate with the repression.

In April alone, 203 public protests took place in Cuba, 10% more than in March, and the highest number since September 2020, while more and more Cubans refuse to collaborate with the repressive forces, reveals the monthly report of the Cuban Observatory of Conflicts (OCC).

Of the total number of protests covered in the report, 156 were related to political and civil rights, and the other 47 to respect for economic, social and cultural rights.

The report underlines that during the month of April, due to the celebration of the 8th Congress of the PCC, "the state of siege was intensified in the country with extreme security measures and isolation of activists".

Among these extreme measures, the OCC mentions, among others, "acts of repudiation, beatings, arbitrary arrests, house arrest, death threats, cutting of communications, destruction of their cell phones, assassination of their reputation in the mass media, illegal surveillance and threats against their children".

The response of civil society to the increased repression was more demonstrations of discontent, the report states: "57% (117) of the protests were in rejection of the repression. This confirms that repression only manages to multiply the protests".

The human rights organization insists that "the symbolic capital of the new dissidence increases as that of the Cuban government decreases".

The OCC highlights the "10 lessons" of this month of April

According to the OCC, insubordination is growing in the country, not diminishing. The organization gives the example of the demonstrations in support of artist Luis Manuel Otero Alcantara for his hunger and thirst strike in the last days of April.

On the island, not only political protests are multiplying, but also public demonstrations for economic and social reasons, mostly related to the abusive imposition of fines, the lack of medicines, the spread of the COVID-19 pandemic, the lack of housing and the increase in the cost of living due to the monetary unification, the monthly report indicates.

The organization stresses that citizens who used to passively observe the demonstrations are now "beginning to show verbal and physical solidarity with those attacked by the authorities, thus becoming participants in the protests".

The report states that the symbolic and communicative codes of the new dissident wave, driven by groups such as the San Isidro Movement and 27N, "connect better with the entire population and the rest of the world". The influence of artists and intellectuals has made the protests reach "a universal language" that transcends the island's borders, it says.

The Observatory adds that "a new phenomenon is beginning to be perceived" in Cuba: citizens are beginning to refuse to collaborate with the repression, which reflects the "breakdown of ideological control over society".

The report concludes that the current situation in the country "is much more serious and uncertain" than that of the so-called "special period" in the 1990s.

"This time it is not only an economic crisis but an ideological and political one. Any minor incident can generate an uncontrollable chain of events that would make possible a radical change, either peacefully or even violently," warns the OCC.