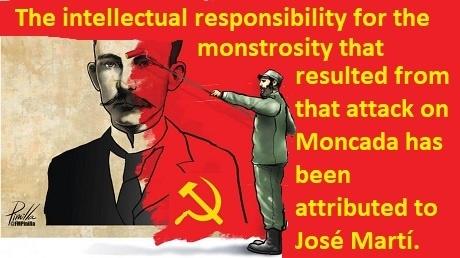 Martí: Communist?  What is happening today in Cuba, its instigators have told us, began with the attack on a barracks in Oriente. The intellectual responsibility for the monstrosity that resulted from that attack on Moncada has been attributed to José Martí. How much truth is there in that statement?

The Castro revolution is based on a foundation of lies. Cuba is the only case in the world where communism achieved power by insistently denying its Marxist essence. The methodological need to insert into praxis the "scientific" socialism of Marx and Engels institutionalized the lie. This was undoubtedly made more acute by the eccentric directives of the foreman of the Creole version: false nationalism, ruthless anti-Americanism and hypocritical anti-capitalism. The falsification of data, history and facts has been part of the modus operandi of Castroism. The Cuban communists have spared nothing when lying. It was to be expected that Cuba's distinguished figure would not escape the trolling onslaught.

José Martí was never or could never have been a socialist, much less a communist. His direct criticism of socialist pretensions is clearly exposed. Moreover, the Apostle of Cuban Independence structurally rejected the compelling premises that underpin the theory of his contemporary, Karl Marx. Martí believed in the concord of social classes, not in a pretended struggle. The economy and the relations of production were, for the author of the Communist Manifesto, the determining factor in the life of man. This conceptualization was absurd for the Apostle. In Martí's rich written lexicon, the word "economy" is only found fourteen times. This represents a dramatic difference with the use of the word "freedom", which appears in three hundred and forty-six instances.

Martí cannot be blamed for not having been informed about socialism. There were, in 1886, thirty-four socialist publications (five of them were newspapers) in the United States. The Cuban national hero was a prolific and responsible reader. Already in the land of Lincoln there was also, since 1852, a communist party that had been founded by a German named Joseph Weydemeyer. What most shocked Martí about the socialist schemes (in all their variants) can be synthesized in four points: (1) the masked demagogy of his leadership, using hypocritical diatribes to cajole the poor and attain political power; (2) the social and cultural price of subordinating the individual to a collective; (3) the fostering of a cyclopean, bureaucratic and invasive State; (4) and the trampling of freedom to implement those "confused" ideas.

His "anti-Americanism" is another misrepresentation of Castroism and his courtly intelligentsia. To call the U.S. the "...freest and greatest society on Earth" would disqualify Martí from such a qualification. Selective criticism of aspects of a society, in a particular era, is not the same as disdain for it. The Cuban independence Apostle understood that American democracy was an imperfect but perfectible phenomenon. The impressive economic growth that capitalism and the Industrial Revolution evidenced in the 19th century in its best rehearsal, the United States, brought, as was to be expected, problems of social adaptation, given the magnitude of the process. Martí observed that and suggested avenues of systemic improvement, but never advocated, not even implicitly, its dismantling and replacement with the socialist delirium. This is even more scandalous when those who make these false assertions of trying to connect Martí with Marxism, hide assertions that reflect his admiration for the United States, its political and economic system and his repudiation of socialism.

Martí's work defends him grandiloquently against the infamous parallelism that links his ideals with the communist project. Castrocommunism will not succeed in extending the defamation of Cuba's distinguished figure beyond his limited stay in power. What a nightmare! So many years of vilification.