Fact Sheet on February 24, 1996 Brothers to the Rescue Shoot down 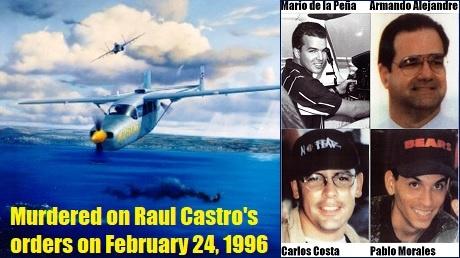 Fact Sheet on February 24, 1996, Brothers to the Rescue Shoot down.

“Facts are stubborn things; and whatever may be our wishes, our inclinations, or the dictates of our passion, they cannot alter the state of facts and evidence.”― John Adams, Boston Massacre trial (1770).

February 24, 1996, shoot down was an act of state terrorism that blew two civilian aircraft out of the sky with air-to-air missiles while in international airspace after the regime planned the act months beforehand with its espionage network in the United States.

FACT 1: By definition: Terrorism is the calculated use of violence (or the threat of violence) against civilians in order to attain goals that are political or religious or ideological in nature; this is done through intimidation or coercion or instilling fear.


FACT 2: Cuba is responsible for violating the right to life (Article I of the American Declaration of the Rights and Duties of Man) to the detriment of Carlos Costa, Pablo Morales, Mario De La Peña, and Armando Alejandre, who died as a result of the direct actions of its agents on the afternoon of 24 February 1996 while flying through international airspace.

FACT 3: Cuba is responsible for violating the right to a fair trial (Article XVIII of the American Declaration of the Rights and Duties of Man) to the detriment of the relatives of Carlos Costa, Pablo Morales, Mario De La Peña, and Armando Alejandre, in that to date the Cuban authorities have not conducted an exhaustive investigation with a view toward prosecuting and punishing the perpetrators and have not indemnified those same relatives for the damage they suffered as a result of those illicit acts.

Lawsuits Against State Supporters of Terrorism: An Overview by Jennifer K. Elsea
https://fas.org/sgp/crs/terror/RS22094.pdf

FACT 5: WASP spy network was involved. One of the “illegal officers” (Gerardo Hernandez) was convicted of conspiracy to commit first-degree murder based on his role in the February 24, 1996, shoot-down of two unarmed civilian aircraft in international airspace by Cuban Air Force jet fighters, which resulted in the deaths of four people, three of them U.S. citizens.

Department of Justice on Obama Commutations

FACT 6: Brothers to the Rescue had spotted and saved thousands of rafters in the Florida Straits and was engaged in such a mission on that day. The one plane that skirted the boundary briefly was the only one to return. The other two were shotdown miles away from Cuba’s boundary having never entered or touched it on that day and the planes had been in contact with the Cuban tower throughout the flight.

FACT 7: On July 26, 1996, the United Nations Security Council: "Noting that the unlawful downing of two civil aircraft on 24 February by the Cuban Air Force violated the principle that States must refrain from using weapons against airborne civil aircraft, the Security Council this afternoon condemned such use as being incompatible with the rules of customary international law "

FACT 8: Ana Belen Montes, the US intelligence community's top analyst on Cuban affairs had throughout a sixteen-year career at the Defense Intelligence Agency sent the Cuba intelligence service sensitive and secret information and helped to shape US opinion on Cuba. Investigation against her was triggered by her odd behavior before and after the Brothers to the Rescue shoot down. On September 21, 2001, Ana Belen Montes was arrested and subsequently charged with Conspiracy to Commit Espionage for the government of Cuba. Montes eventually pleaded guilty to spying, and in October 2002, she was sentenced to a 25-year prison term followed by 5 years of probation.

FACT 9: On December 27, 2010, and again in a January 19, 2011, clarification the defense of Cuban spy-master Gerardo Hernandez acknowledged that "there was overwhelming evidence that the 1996 shoot-down of two Brothers to the Rescue planes occurred in international airspace, not Cuban territory."

The Miami Herald: Cuban spymaster now claims Brothers to the Rescue shooting was outside Cuban airspace by Jay Weaver December 27, 2010

FACT 10: On December 17, 2014, President Barack Obama commuted Gerardo Hernandez’s two life sentences and returned him along with two other spies jailed for crimes in the United States to Cuba where they were received with a hero’s welcome in what is an immense propaganda victory for the Castro regime.

Department of Justice on Obama Commutations 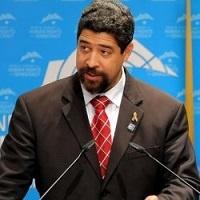 John Suarez, is a human rights activist and the Executive Director at the Center for a Free Cuba. Suarez was a program officer for Latin America Programs at Freedom House. He has been interviewed by TV, radio, and print media on Cuba. He holds degrees from Florida International University and Spain’s Universidad Francisco de Vitoria.
Prev Next