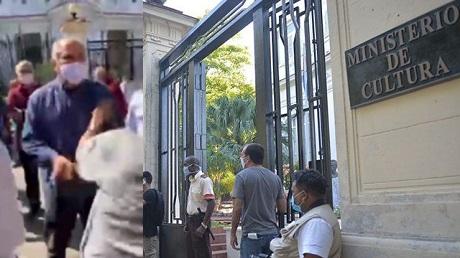 A group of Cuban dissidents who had assembled before the Ministry of Culture headquarters in Havana on Wednesday filmed Culture Minister Alpidio Alonso physically assaulting a journalist and stealing his mobile phone.

Alonso was among several Communist Party officials who resorted to violence in the face of a small, peaceful crowd assembling in front of the ministry to demand a say in how their government manages the artistic community. The group had also chosen the date as an homage to Cuban founding father and poet José Martí, born on January 28.

Reports indicate that fewer than 30 people had assembled before the Ministry of Culture, but the group was enough to intimidate officials into violence.

The incident followed an unprecedented protest in the same location in November. Hundreds of artists and other intellectuals, most of them part of Cuba’s growing youth artistic movement, organized a sit-in in front of the Ministry of Culture in November after police attacked a member of the San Isidro Movement, an anti-communist artistic collective. Several members of the movement had engaged in a hunger strike in response to the arrest of one of their members, rapper Denis Solís. Solís was sentenced to eight months in prison for filming a police officer illegally entering his home.

Solís’s arrest has triggered an unrelenting wave of unrest in the island nation, which has endured over half a century of communism. The San Isidro Movement itself was founded as a response to further repression of artists through the passage of Decree 349 in 2018, which makes it illegal for any Cuban citizen to create any cultural item — a song, a film, a video, a painting — without a permit from the Ministry of Culture.

Dissidents began circulating videos of Alonso, the culture minister, attacking Mauricio Mendoza, a journalist with the publication Diario de Cuba, on social media on Wednesday afternoon. Alonso, in a dark blue shirt, appears to smack Mendoza and steal his phone before the crowd of officials around him also begins taking swings. There is no indication that the crowd of reporters and dissidents was presenting any physical threat to the officials.

Cuban dissident outlets reported that, following the attack on Mendoza, the Communist Party sent state security agents to violently repress the assembly, arresting everyone present. According to the independent outlet Cubanet, police used a bus to wrangle together the dissidents and take them away, detaining them indefinitely and under seemingly no legal charges. At least four of those arrested have been liberated as of Thursday, while two others are under house arrest. The whereabouts of the rest remain largely unknown. In cases of mass arrests of dissidents, however, Cuban police often drive them away and leave them stranded hours from their home with no way of getting back, so it is possible that many of those detained are technically free but have not been able to contact family.

Mendoza, the victim of Alonso’s attack, was detained for about three hours without receiving a reason for the deprivation of his liberties. In detailing his experience to his publication, the journalist noted he was broadcasting the scene outside the Ministry of Culture live on social media when the minister himself attacked him.

“When Alpidio came out I got closer with my phone to broadcast a live [sic], and he smacked me,” Mendoza said. “That’s when everything happened.”

Mendoza was among those forced into a bus and said that he witnessed the violent beatings of two women, dissidents Camila Lobón and Celia González, in the bus. He also stated that police later beat him and the other detainees at the station they were taken to.

The Ministry of Culture issued a statement following the incident claiming the artists and journalists involved were “mercenaries … paid by American federal agencies” and that the ministry would not negotiate with “counter-revolutionaries.” The statement also accused the dissidents of violating social distancing protocols allegedly in place, but little enforced on those not considered dissidents, to fight the Chinese coronavirus pandemic.

“In a frankly irresponsible manner, those who remained in the street expressed that they would not leave. During the over two hours that the incident transpired, media paid for by the government of the United States were commenting live on what was happening and reinforcing the provocative arguments of the counter-revolutionaries,” the ministry claimed.

Diario de Cuba reported that, later that night, the Cuban government broadcast a report on Alonso’s assault of a journalist using video selectively edited to omit Alonso’s attack. Cuban state television also reminded the public that the nation’s communist constitution prohibits free speech in cases of “collective security, the general wellbeing, [and] respect for public order” — all loosely interpreted to benefit the Party.

Cuban Prisoners Defenders, a human rights organization that monitors arbitrary and politically motivated arrests on the island, denounced the attack on journalists and artists in a statement Thursday.

“Clearly if the ministers of Cuba behave this way,” the statement read, referring to Alonso’s attack, “we believe that something we have been saying for a long time at Prisoners Defenders is obvious: Cuba is a fascist dictatorship that has nothing to do with social democracy and that should be isolated from any ideological support, as it represents reactionary fascism and at the same time the most retrograde Leninism.”

The statement went on to refer to Cuba as a “danger to the region and the world.”

As of January 2021, Cuban Prisoners Defenders has confirmed 138 cases of individuals sentenced to time in prison for political reasons. 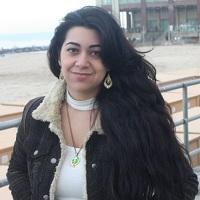