Castroism prohibits the mobilization of journalists and activists on Sunday

Castroism prohibits the mobilization of journalists and activists on Sunday 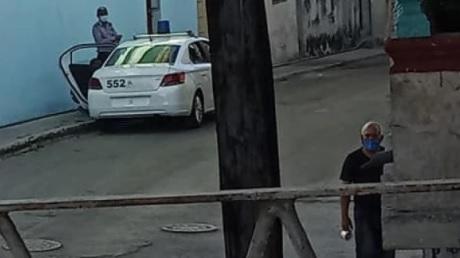 Castroism prohibits the mobilization of journalists and activists on Sunday. Several Cuban activists dawned besieged and under house arrest this Sunday by State Security agents.

"Repression, the violation of our freedoms, cultural and of all kinds, continue to be the main tool of forced submission of an abusive government such as the one that reigns today on the island. I dawn besieged by the State Security and the political police," denounced the activist AfrikReina.

"The crime in question? To create a prosperous and joyful Cuba, in our present and for our future: we DO want a Cuba "with all and for the good of all", she assured.

Also under house arrest is the artist and leader of the San Isidro Movement, Luis Manuel Otero Alcántara, and the mobility of rapper Maykel Osorbo and some twenty other artists and activists has been restricted.

"How long will the surveillance against Luis Manuel last?" protested journalist Maria Matienzo.

"Today marks a week of being under siege and in house arrest without a crime and no prosecutor has given me a court order. We'll see how long the repression lasts, I continue to transform violence into art," said Otero Alcántara himself.

Independent journalist Luz Escobar, of the daily 14ymedio, also reported that on April 11, a young man who identified himself as a State Security agent told her that she could not leave.

"I asked him the reasons and he replied that he did not know. I ask him to show me his ID card and he shows me one that has in red letters the initials: DSE. #InformarNoEsDelito," she maintained.

From Santiago de Cuba, it was reported that the communications company ETECSA had cut off telephone and Internet service to José Daniel Ferrer, leader of the Patriotic Union of Cuba (UNPACU) and other activists who are at the headquarters of the opposition organization.

CiberCuba journalist Iliana Hernandez also woke up this morning with surveillance at the corner of her house to prevent her from moving. Patrol car 635 remains with an officer guarding her.

"Another day under siege. The camera I have on the corner is not enough for them," said Hernandez.

The journalist reported that she has been under siege all weekend, andthe arrest of which she was the victim on April 8 while walking with friends on Obispo Street in Havana.

During one of the house arrests this weekend, Iliana Hernandez decided to confront the repressors: "Then they don't want to be on the list of human rights violators and look at the patrol there. We have the right to express ourselves, how long is this going to go on. This year we will knock them down, so they will know," he said.

CiberCuba was born with the purpose of being the space of convergence, information and debate for all Cubans. Cuba is not only the archipelago and the Isle of Youth, it is the millions of Cubans who live there as well as the millions who have made other lands their habitual place of residence.
Prev Next