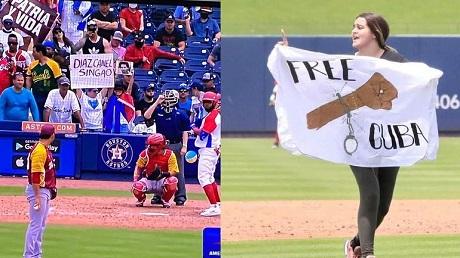 The opening game of the Pre-Olympic Baseball Tournament between Cuba and Venezuela will be remembered in the history of these events not only because of the fierce competition on the field, but also because of the unprecedented number of people who attended the game to protest and make visible their position against the Cuban regime.

Several of the attendees showed signs with slogans reading "Freedom", "Homeland and Life", which were placed in strategic places to be captured by the broadcasting cameras and, therefore, visible to all Cubans on the island enjoying the game.

Others also wore T-shirts with texts and even photographs of the artist Luis Manuel Otero Alcántara, who was released from captivity in the "Calixto García" hospital while the game was taking place.

In view of these actions, the Cuban Baseball Federation showed its irritation and sent a letter to the World Baseball and Softball Confederation (WBSC) to demand that it take action against this type of "provocations".

The communiqué began by stating that the FCB "considers it unacceptable that characters contrary to the spirit of a sporting event attack the concentration of the team that represents us in the pre-Olympic tournament in Florida, United States".

The baseball leaders on the island showed their disagreement with the person who broke into the field during the fourth inning. They criticized the attitude of the authorities, "who did not respond with the necessary agility" and described this as "a clear example of what should not happen if the local authorities act as established by the security protocols that the protagonists of this event deserve".

The person who rushed onto the field was young Kiele Alessandra Cabrera, a Cuban-American descendant of a family of exiles and activists who paralyzed the game for at least two minutes.

"I thought a few days ago that something like that happened in the '99 Orioles game against Cuba, and I feel that was the only way to get the attention we need to talk about all the things that are happening in Cuba, all the injustices that are being committed," the girl explained to journalist Javier Diaz of Univision 23.

The FCB described as "inadmissible the carrying of posters and verbal offenses, particularly orchestrated in the box areas behind home plate and on the bench occupied by our team".

It further threatened the WBSC that it was warned in a timely manner about the protest actions that were going to develop and with which they are not willing to deal.

"Not stopping this situation would result in generating a destabilizing climate for athletes, coaches and other members of our delegation, which reiterates its commitment to the mission of giving its all in each presentation and contributing to the show with respect for ethics and fair play," they said.

Finally, they asked the government of the United States, in its capacity as host country, and the Organizing Committee to ensure the safety of all those attending the event.