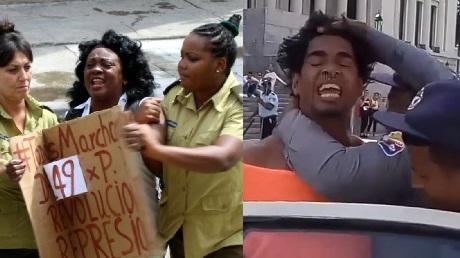 Amnesty Int'l: Communist Cuba represses all dissent. The Amnesty International Report 2020/21: The State of the World's Human Rights, published on Wednesday, denounces that the Cuban regime represses all forms of dissidence.

The report, which covers 149 countries and contains an exhaustive analysis of the trends observed by this organization in human rights around the world in 2020, mentions several cases of Cuban opponents, activists and journalists whose rights were violated in the period covered by the report, among them José Daniel Ferrer, Camila Acosta, Luis Manuel Otero Alcántara, Denis Solís and Roberto de Jesús Quiñones Haces.

The region of the Americas continues to be one of the most dangerous in the world for defending human rights and Cuba is mentioned among the countries where journalists and human rights defenders suffered aggressions, threats, prosecutions, arbitrary detention and unlawful surveillance.

The Caribbean country is also mentioned among the nations where the right to freedom of expression was further threatened due to restrictions imposed by COVID-19.

Amnesty International urges governments to recognize the important role that journalists play in society and to ensure that they can carry out their work free from harassment and violence.

The annual report recalls that Cubans are among the tens of thousands of people who continued to "flee violence, poverty and inequality".

The Cuba section is reproduced in full below:

Amid reports of food shortages, the authorities continued to repress all forms of dissent, for example by imprisoning independent artists, journalists and members of the political opposition.

Throughout the year there were reports of shortages of food and other basic goods, leading senior government officials to call on the Cuban population to grow more food for their own consumption.

In September, the graffiti artist known as Yulier P. painted a disturbing image of someone eating his own bones on the streets of Havana. Despite UN recommendations to suspend sanctions in order to ensure access to essential food and medical supplies to adequately respond to the COVID-19 pandemic, the United States continued to impose its economic embargo on the country.

The authorities continued to repress all forms of dissent, and imprisoned political leaders, independent journalists and artists. In April, authorities released José Daniel Ferrer García, leader of the unofficial political opposition group Unión Patriótica de Cuba (UNPACU) and a former prisoner of conscience, who had been imprisoned in October 2019 and tried on February 26 in a trial marred by irregularities.

News of independent journalists fined for reporting on COVID-19 and its impact on the country led to calls for President Miguel Díaz-Canel to take immediate steps to guarantee press freedom.

Civil society and some journalists also expressed concern during the year that Decree Law 370, concerning freedom of expression on the web, appeared to reinforce the Cuban government's web of digital control and censorship, especially during the pandemic.

In March, CubaNet journalist Camila Acosta was detained for several hours and fined for disseminating information on Facebook. In September she was detained again and threatened with prosecution for protesting against Decree 370.

On September 4, authorities released Roberto Quiñones Haces, 63, an independent journalist and contributor to CubaNet. Roberto had been tried in 2019 and sentenced to one year in prison for "resistance" and "disobedience" because of his work as a journalist.

Amnesty International, ARTICLE 19, the Institute for Peace and War Reporting, and the Committee to Protect Journalists repeatedly called for his release, especially considering the increased danger he was in if he contracted COVID-19 because he had previous pathologies and was over 60 years old. Roberto Quiñones had published articles about his prison conditions, which included overcrowding, poor water and food quality, and lack of adequate medical care.

Throughout the year, authorities harassed and intimidated members of the San Isidro Movement, composed of artists, poets, LGBTI activists, intellectuals and independent journalists. Members of the Movement were at the forefront of the struggle against Decree 349, a law designed to censor artists. The authorities' actions symbolized Cuba's ongoing repression of the right to freedom of expression in the country.

Luis Manuel Otero Alcántara, a key leader of the Movement, was reportedly imprisoned for two weeks in March after being charged with "insulting the symbols of the homeland" (Article 203 of the Penal Code), a crime that did not conform to international human rights law and standards, and "damage" to property (Article 339).

In November, the San Isidro Movement attracted international attention when some of its members went on hunger strike to demand the release of rapper Denis Solis Gonzalez, who had been sentenced to eight months in prison for "desacato", an offense that also did not conform to international human rights standards. Following a police raid on the Movement's headquarters in Old Havana (carried out, according to the official Cuban press, for alleged breaches of health protocols relating to COVID-19), the authorities again took Luis Manuel Otero Alcántara into custody for several days and detained intellectual Anamely Ramos González for approximately 12 hours.

In response to the raid, on November 27 hundreds of artists and intellectuals organized an unusual protest in front of the Ministry of Culture and obtained an equally unusual audience with the Vice Minister of Culture. For approximately two weeks after the meeting, some members of the Movement, including Luis Manuel Otero Alcántara and Anamely Ramos González, and approximately 10 or more activists and independent journalists, were placed under constant surveillance and risked arrest by police and state security agents if they left their homes, essentially constituting house arrest contrary to international law.