Amnesty Int'l Calls Out Castroism for Not Allowing N15 Protests 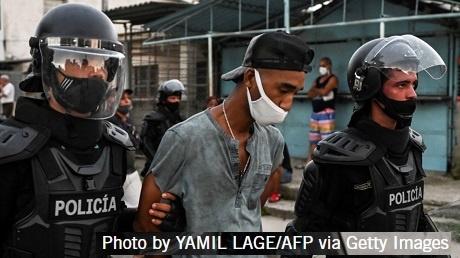 Amnesty Int'l Calls Out Castroism for Not Allowing N15 Protests. Cuba: Rejection of request to protest is yet another example of intolerance of freedom of expression.

In light of the Cuban government’s negative response to requests from civil society to hold a Civic March for Change, planned for 15 November, to call for the release of activists detained for exercising their rights, including following the historic protests of 11 July, as well for human rights to be respected and for differences to be resolved through dialogue, Erika Guevara-Rosas, Americas director at Amnesty International, said:

“Groups of people from various provinces around the country have been submitting requests in recent weeks to different local governments asking for authorization to carry out peaceful marches, organized in a clearly defined way in a legitimate exercise of their right to freedom of expression. Instead of guaranteeing these rights, President Miguel Díaz-Canel’s government has declared these civil society marches ‘illegal’ and ‘unconstitutional’, once again violating the right to peaceful protest in Cuba.”

The international community must not forget the hundreds of people detained during the historic protests on 11 July 2021 simply for peacefully exercising their right, as well as the six people named prisoner of conscience by Amnesty International shortly afterwards

“Amnesty International has received reports that activists have been arbitrarily detained and that people who have responded to the Archipelago group’s calls to demonstrate have been harassed, intimidated and put under surveillance by members of the security forces. This response by the authorities is consistent with the policy of repression, applied for decades in Cuba, which criminalizes peaceful protest and imprisons and ill-treats Cubans from all walks of life solely for expressing their opinions. We will be monitoring the actions of the authorities, to denounce any act of repression against protesters.”

“The international community must not forget the hundreds of people detained during the historic protests on 11 July 2021 simply for peacefully exercising their right, as well as the six people named prisoners of conscience by Amnesty International shortly afterwards, as a symbolic gesture towards the many hundreds more who likely deserve this designation, who must be released immediately and unconditionally.”

Amnesty International is a global movement of more than 10 million people who take injustice personally. We are campaigning for a world where human rights are enjoyed by all. We are funded by members and people like you. We are independent of any political ideology, economic interest or religion.
Prev Next