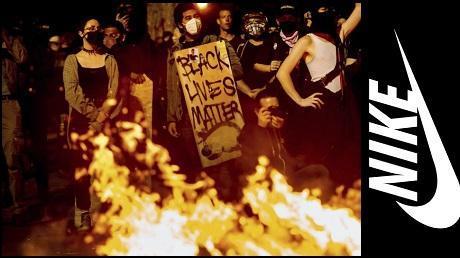 On Thursday, a coalition of a few hundred black pastors, bishops, and other clergy sent a letter to Nike President and CEO John Donahoe. They demanded his company drop its support for the “anti-Christian” Marxist Black Lives Matter movement and condemn the Chinese government for its oppression of the Uyghur minority. Bishop Aubrey Shines spoke at a press conference announcing his group, the Conservative Clergy of Color.

“Nike is on record supporting the Black Lives Matter movement,” Shines said at the press conference. “A multi-billion dollar company is funneling funds into an organization whose only objective is to destroy America as we know it… while they turn a blind eye to China.”

Shines said that “several hundred black and brown pastors and bishops throughout this nation” have joined together in the group Conservative Clergy of Color. He began the press conference by reading from the group’s letter to Donahoe.

“We the leaders of Conservative Clergy of Color have watched with sadness and frustration as the country we love has been torn apart by violence and looting,” the letter begins. “This civil terror, perpetrated and lead by the Black Lives Matter movement, has turned American against American and possibly set race relations back decades.”

“Black Lives Matter, a movement run by anti-Christian, self-proclaimed Marxists, hijacked legitimate calls for police reform and turned it to their own ends,” the letter explains. “This is not a group interested in constructive change; through their vicious campaign to defund police and silence anyone who disagrees with them, they have destroyed livelihoods and gotten innocent children killed. It is antithetical to the nonviolence that Dr. King and the Civil Rights movement stood for.”

The black pastors accused Donohoe and his company of having “helped fan the flames of this unrest by caving to support Black Lives Matter and promising financial support to their allies. You have given Black Lives Matter a platform, and as such, have contributed to the chaos that is tearing apart every major city in our country. You are culpable in the violence that has wronged so many innocents in the name of ‘the revolution.'”

While Nike supports Black Lives Matter in a “show of virtue signaling,” the company has “willfully ignored real suffering and oppression abroad,” the pastors argued. “At this very moment, millions of ethnic Uighurs are languishing in ‘reeducation’ camps in western China. They are rounded up for being a minority and forbidden from practicing their faith while being forced to work as slaves in factories. These factories make products for your company that are worn and promoted by dozens of players in various athletic leagues. Yet while this atrocity plays out at the hands of the Communist Chinese government, you have been silent.”

“You have been happy to play into the hands of anarchists at home and ignore slavery abroad,” the black pastors declared. “We demand that you immediately sever all business ties with China and acknowledge the suffering of the Uighur people. We demand you end your support to the violent Black Lives Matter movement and any affiliated causes. We ask you take a hard look at real injustice in the world and to remember that change comes through forgiveness and compassion, not violence.”

Conservative Clergy of Color assured Donohoe and Nike that “we are not here to ‘cancel’ you, as is the popular thing these days.” Rather, they said they are “firm believers in sensible, civic dialogue. We would like to extend the hand of Christian fraternity and offer to meet with you one on one to discuss these important matters and this crucial period in our country’s history.”

The truth about Black Lives Matter

Although Americans firmly believe with the statement that “black lives matter,” the leaders of the official Black Lives Matter movement have identified themselves as “trained Marxists.” They and others have pushed Marxist critical theory to support a broad revolution in the name of racial justice. Even The New York Times launched the “1619 Project,” which uses Marxist critical theory to demonize America as a country founded on racist slavery, as opposed to a country founded on the Declaration of Independence.

The 1619 Project pushes an unguided and destructive revolution in the name of “racial justice.” It preaches that various aspects of American society, such as capitalism, are oppressive and racist. Indeed, the Smithsonian briefly taught that even things like science, the nuclear family, the Judeo-Christian tradition, and politeness itself are oppressive aspects of a “whiteness” culture.

Portland activist Lilith Sinclair showed how Marxist critical theory pushes aimless revolution. “There’s still a lot of work to undo the harm of colonized thought that has been pushed onto Black and indigenous communities,” she said. As examples of “colonized thought,” she mentioned Christianity and the “gender binary.” She said she organizes for “the abolition of … the “United States as we know it.”

When vandals toppled a statue of George Washington in Portland, they spray-painted “1619” on the statue. When Claremont’s Charles Kesler wrote in The New York Post “Call them the 1619 riots,” 1619 Project Founder Nikole Hannah-Jones responded (in a since-deleted tweet) that “it would be an honor” to claim responsibility for the destructive riots. Rep. Ilhan Omar (D-Minn.) called for the “dismantling” of America’s “economy and political system,” in order to root out supposed racist oppression.

Left-leaning journalists and Democrats have insisted, over and over again, that the riots are “mostly peaceful protests.” Yet the riots have destroyed black lives, black livelihoods, and black monuments. At least 22 Americans have died in the riots, most of them black.

Many black leaders have denounced the Black Lives Matter movement, noting that the activists do not focus on the black people who die every year from black-on-black crime. Now, these black pastors have vocally condemned the movement. Nike and others should seriously reconsider their support for this divisive activist group that inspires violent riots.