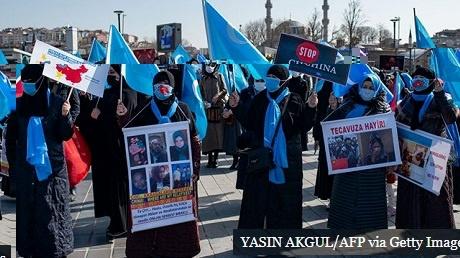 Women of the oppressed Uyghur minority demonstrated at the Chinese consulates in Kazakhstan and Turkey on Monday, International Women’s Day, to call attention to the Chinese Communist Party’s brutal campaigns of “re-education” and ethnic cleansing against their families.

Human rights magazine Bitter Winter reported on the demonstration in Kazakhstan, which borders on China’s Xinjiang province, where the Uyghurs and other minorities have been herded into “re-education camps” and subjected to population control programs:

Halida Akhytkhan has lost her entire family. “In 2018, she says, they arrested my three sons — Rahimbergen Satipaldi, Rahimbergen Orazjan, and Rahimbergen Ahimetjan — and their wives. Then put them all into the concentration camps. My daughters-in-law were sentenced to prison terms from 2 to 6 years, while 28 years were given to my two elderly sons, and 10 years to my youngest son.” Halida is very popular on the Web, where she tells her story as a grandmother of 14 boys and girls living in Xinjiang — but she does not know where they have been taken now.

Their men are accused of “separatism” or “religious extremism.” But Gulbaran Omirali says Azamat Aibolat, the 23-year-old son of her brother, was arrested just for performing namaz, the prayer in direction of the Kaaba in Mecca, and he believed it was not forbidden. He was wrong. In April 2018, he was arrested, and he was later sentenced to 15 years in jail.

Bikamal Kaken is the wife of Alimhazi Mukhay. “I haven’t seen him in the last four years, she says. I do not have clues whether he is alive or not.” She knows he was sentenced to 9 years in prison for planning to flee to Kazakhstan and sending there his family.  A little girl, the daughter of Alimhazi Mukhay, also wanted to participate in the protest. “I am not well today, she says, but I still come to help my father. Dear president [of Kazakhstan], I trust you can help us to bring my father home.”

The demonstrators said Muslims in Xinjiang are increasingly imprisoned for “offenses” such as praying, taking pride in their culture, or even spending too much time outside the grasp of the Chinese Communist Party (CCP) in places like Kazakhstan. The demonstrators said even “graduates” of China’s concentration camps can swiftly find themselves imprisoned again.

A similar event was held outside the Chinese consulate in Istanbul, Turkey, where ethnic Kazakhs spoke of receiving decades-long prison sentences without anything the free world would recognize as due legal process.

Some of the demonstrators claimed they have heard ominous statements from Chinese officials that the CCP is beginning to see Kazakhstan as a security threat because Uyghurs and Kazakhs from Xinjiang can get there so easily.

Kazakhs are growing nervous about China’s oppression of Muslims, as they are acutely aware of their country’s strategic importance to China’s regional ambitions. Sizable demonstrations have been held in Kazakhstan against Beijing’s growing political and economic influence.

Like many clients of China’s Belt and Road infrastructure program, which obliges partner nations to borrow huge sums from Chinese banks, and never delivers as many good local jobs as promised. Activists who once felt safe criticizing China from Kazakhstan say the CCP now has enough influence in their country to get them arrested.

Uyghurs and Kazakhs likewise fear China has accumulated enough leverage with Turkey to silence its criticism of the CCP’s abuses. Turkish President Recep Tayyip Erdogan, who styles himself a champion of oppressed Muslims, is notably less outspoken in criticizing China’s abuses than he was a decade ago, while China’s investments and trade with Turkey have soared.

The women protesting in Istanbul on Monday had an immediate concern: a looming extradition deal between Turkey and China that Uyghur refugees fear could send them back into the CCP’s concentration camps.

The Turkish government insists the extradition deal will not lead to the mass repatriation of Uyghurs. The Chinese embassy to Turkey recently accused protesters of using “made-up lies to attack the Chinese government’s Xinjiang policies, blacken China’s image and exploit the problems related to Xinjiang”… all of which are crimes under Chinese law.

China’s abuse of the Uyghurs has been described as ethnic cleansing, and increasingly genocide, because it features both forcible “re-education” that displaces Uyghur culture with Chinese Communist dogma, and efforts to reduce the Uyghur population through forced sterilization and forced abortion. Women trapped in China’s concentration camps have also denounced the widespread use of gang rape as a form of torture against women, in some cases forcing some women in the camps to tie up others before they are raped. 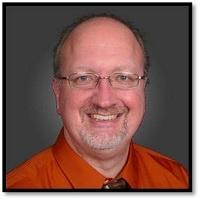 Author: John Hayward, National Security Deputy Editor. I'm a conservative because there is so much about the American tradition that is worth conserving. I worry that people aren't as frightened of authoritarians and totalitarians as they should be. Freedom and capitalism are inseparable, because without capitalism, freedom just means shouting your opinion and hoping somebody important is listening. @Doc_0
Read full article on BREITBART