Dictatorships and Their Paradigms. New edition in one book 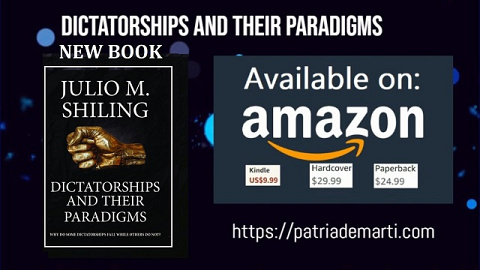 Dictatorships and Their Paradigms. New edition in one book.

Why Do Some Dictatorships Fall and Others Do Not?

This new edition is published by the Patria de Martí Publishing Division with the collaboration of Alexandria Library.

The new edition of Dictatorships and Their Paradigms is available on in 3 formats:

The book is also available in Spanish, "Dictaduras y sus paradigmas"  on Amazon►

Comments on the book Dictatorships and their Paradigms:

Do you want to support Patria de Martí and The CubanAmerican Voice? Buy a copy of Dictatorships and Their Paradigms. Please share the video! Buy on Amazon: Kindle format ► or Paper formats ► 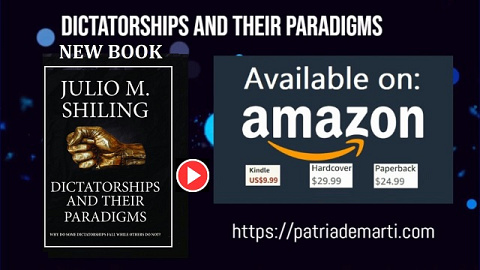 “This is a rigorous, tenacious, and inexorable publication about the reality that dictatorships and their paradigms treasure.  The author approaches with great rigor and outstanding academics the world of totalitarianism and ideologies describing them from their most political-citizen perspectives. A complete, structured, and detailed work for which the author, Julio M. Shiling deserves recognition for his research and methodological application.”

Jorge Barnés, Professor and Director at the Pontifical University of Salamanca

“The expansion of totalitarian ideas, despite their terrible failures, is one of the great paradoxes of the present time. Part of the explanation is due to a great cultural confusion, ranging from epistemological questions to a confused assessment of the welfare costs of their nonsensical policies sponsored by autocrats in the shadow, as well as to a serious semantic confusion. This book is a great contribution to the clarification of totalitarianism, its typology, its effects, its common features, and finally the unraveling of its incomprehensible jargon."

"Its reading is of great value, both in terms of being informed as well as educated, to prevent attacks on freedom. Its fruits will be very valuable due to the quality of its teachings, and it will get its deserved recognition. It is in and of itself a formidable breath of encouragement to any freedom fighter.”

“Julio Shiling’s work is probably the most profound study of the nature of the totalitarian system in recent times. He takes us over the different variants of dictatorial systems, making a clear and necessary distinction between authoritarianism and totalitarianism in its different meanings. His goal, ultimately, is to glimpse the possibilities of democratization, starting from the various totalitarian origins. The work is undoubtedly a very significant contribution to the study of this reality in the 20th and 21st centuries.”

“Wittgenstein claimed at the beginning of the 20th century that if we could agree on the use of words, arguments would almost disappear. That reality is more evident in these times when the word “democracy” no longer means the same thing to everyone. Something similar happens with the concepts of dictatorship, totalitarianism, and the like. In Latin America today, the existence of “non-democratic” regimes is evident in those that do not even comply with the requirements of the Inter-American Democratic Charter, in terms of separation of powers, independence of the judiciary, transparency of elections, individual guarantees, and freedom of the press. However, there is no agreement on how to qualify these regimes. Qualifications range from simple “authoritarianism” to “totalitarianism,” the most radicalized version. Shiling’s work is an enormous contribution to this discussion. His reflections and characterizations of each of the radical manifestations or dictatorships, as he generically treats them, from the perspective of the paradigm established by Kuhn, are a very significant and enlightening contribution to the conceptual struggle for democracy.

Guillermo Lousteau, Professor. Ex-President of the Interamerican Institute for Democracy

“This book is a detailed approach to the state of power in which dictatorships consist, which goes from its roots in time to the different totalitarian forms of contemporary governments. This is a work to which we must necessarily turn to understand dictatorships in the present and to alert the future.”

“To find ways to solve a problem you have to start by identifying and understanding it. That is what Julio M. Shiling does with dictatorships. This study identifies the common features and operating structures of dictatorial regimes. It is a valuable intellectual contribution to the search for practical solutions to successfully confront and dismantle these systems of government”.

“Julio M. Shiling’s first volume of Dictatorships and Their Paradigms can be described as lucid and precise. The extensive bibliography consulted by Shiling reinforces his statements with quotes and studies made by brilliant analysts throughout history, from Plato to Freud; from Friedrich Hayek to Rousseau. It is a useful, interesting, and fundamental book to understand the mechanics of totalitarianism and why some dictatorships fall while others do not.”

“To establish differences between dictatorship and authoritarianism, exploring the different variants of despotism and in particular exposing the characteristics of a totalitarian regime are key factors in the research presented by Julio M. Shiling. It is really an in-depth work that also leads us to the question, why are there societies prone to different forms of despotism and others not, what psychological processes occur in the citizen and in society to accept a dictatorship without demanding respect for rights.”

Pedro Corzo, Author and President of the Cuban Institute of Historical Memory against Totalitarianism

“Dictatorships and Their Paradigms, Julio M. Shiling’s masterful work, is essential reading for anyone interested in understanding international affairs, but it should be required reading for analysts and policymakers as well. Foreign policy is often formulated reflecting an ethnocentric view from those who have not grasped that totalitarian governments operate differently than open societies. This is a scholarly yet accessible work that succeeds in identifying the characteristics of authoritarian and totalitarian regimes. Five stars!”

“Dictatorships and Their Paradigms is a fascinating and enlightening tour through political science, political history, and political theory aimed at intellectually combating totalitarian regimes and lesser dictatorships that have exacted a terrible toll in lives and human suffering. The author exhibits an impressive command of a vast literature, drawing on eminent thinkers and scholars while not failing to point out when he disagrees with their thoughts and judgments in light of logic and history. It is a true tour de force that will immediately educate and provoke readers to think deeply about the challenges facing a free society from the siren songs of utopian ideologies, and the political movements and regimes they engender.”

“The issue of dictatorship has been with us all our lives. It is almost as old as any other system. I dare not claim that it is part of the human condition, but it will be present for future generations in many geographies. Julio M. Shiling offers us a novel and erudite approach that departs from the beaten path. Congratulations!

Marcos Antonio Ramos, Historian and Professor of the North America Academy and Corresponding Academic of the Royal Academy of the Spanish Language

“Sometimes men and women who engage in political activism for freedom, justice, and prosperity for our peoples—particularly those of us who confront dictatorial regimes— believe that only through action do we achieve our goals. However, when we read works such as Dictatorship and Their Paradigms, by compatriot Julio M. Shiling, we learn of the importance of history and political theory. This knowledge is fundamental for our activism to be more effective. The second volume of Shiling’s work is a great contribution to the struggle against dictatorships, and the building of a free, just, and prosperous society.

“Julio M. Shiling, in Dictatorships and Their Paradigms, identified, in a clear and easy-to-understand way for any reader, without mentioning his name, the precise characteristics of a totalitarian and sultanic dictator, as is the case of Castro in Cuba. Notions such as “cult of personality” are broken down and he succeeds in accurately portraying the particularities of this aspect of dictatorial leadership of extreme personalism. The premise of fostering an aura of favorable intellectuality (one’s own or of sympathizers) around the sultanic figure, seeks two main objectives: to rationalize the dictatorship (although they do not call it that) and, in the case of totalitarians, to gather support to promote the official ideological premise and amend it when the leadership deems it necessary.

“Dictatorships and Their Paradigms [is] a profound, yet at the same time not difficult to understand work on political evolution; very appropriate for the times we live in, in which the citizens of democracies, aware of the value of freedom, maintain an alert posture in order not to make previous mistakes. The book is a very important work about political evolution, but at the same time, it is not difficult to understand. In spite of its academic rigor, it can be read with interest, not only as a reference book, which it is; but also as a rescued History with features that had remained hidden, that make us understand better the great hecatombs to which humanity has been subjected for that cause; and it makes us think about other concealed dictatorial forms that could come. An intelligent and courageous work, which rescues from ostracism many intellectuals who have worked, almost in silence, facing crowds of leftists who have supported dictatorships derived from Marxism-Leninism, and who still support, among others, the Cuban one in spite of its demonstrated lack of validity and its horror. My sincere congratulations to the author, and my congratulations to all readers who enter its pages, and feel the incentive to continue the search for one of the most cherished values that can exist: Freedom.”

“For all of us who express our to dictatorships Shiling’s work is essential reading; for those of us who dream of ridding the world of them, his wor is a bedside companion.”

“This book was probably unique on the subject in Spanish.  But Julio M. Shiling has done such a comprehensive and complete work on totalitarian dictatorships that in any language it is outstanding. The long introduction is very useful, as it directs the reader to all the different sections and allows one to concentrate on the ones most interesting, although all of them are.  The philosophical citations in support of his arguments are truly erudite and, especially for Cubans, his book is essential to explain why the Castro dictatorship has lasted so long.  Dictatorships and Their Paradigms is destined to become a classic—great!

“In Dictatorships and Their Paradigms scholar Julio M. Shiling meticulously dismantles some of the most hackneyed myths used by demagogy, analyzing modern-day despotisms, children as they would be of rationalist fanaticism, and in this task Shiling demonstrates what should be obvious to any attentive observer but for the stupidity or complicity, again and again, of a certain intellectual establishment responsible for obscuring and obsessively trivializing, and this is the fundamental difference between authoritarian dictatorships and totalitarian dictatorships, which is why the author opportunely points out that in the latter, economic reforms, more or less timid, more or less radical, would never bring about the collapse of the ironically established regime, embedded rather, in the marrow of a totalized society, reforms which on the other hand would not be a new tactic at all (see Lenin’s New Economic Policy in the USSR), because what we are dealing with here, as the author makes clear, is not a totalitarian economy which sustains the structures of power, but a totalitarian culture that sustains the structures of that power, something that would not happen even remotely in authoritarian governments. A book that I strongly recommend to all those who want to understand, for example, why the regime of Raúl Castro’s economic opening gestures in Cuba will never lead to the longed for freedom or, better still, why Communism in China is in good health.”

Promotional video of the new book: